Gospel Oak is an inner urban area of north west London in the London Borough of Camden at the very south of Hampstead Heath. The neighbourhood is positioned between Hampstead to the north-west, Dartmouth Park to the north-east, Kentish Town to the south-east, and Belsize Park to the south-west. Gospel Oak lies across the NW5 and NW3 postcodes and is served by Gospel Oak station on the London Overground. The North London Suburb, Gospel Oak, has many schools around it.

The name Gospel Oak derives from a local oak tree, under which parishioners gathered to hear regular gospel readings when the area was still rural. The oak of Gospel Oak marked the boundary between the parishes of Hampstead and St Pancras, and was said to be situated on the corner of Mansfield Road and Southampton Road. The oak vanished sometime in the 1800s and was last recorded on a map of the area in 1801.

There are reports that the founder of Methodism John Wesley preached from the oak, with the 18th century farming population meeting there regularly. The small street named Wesleyan Place, off Highgate Road, was the original site of a very early Methodist chapel that was connected with the famous oak.

Local resident Michael Palin attempted in 1998 to re-plant a new oak tree for Gospel Oak in Lismore Circus, but the tree has not survived.

The history of Gospel Oak can be traced as far back as the history of Hampstead, which was documented in AD 986 by Ethelred the Unready to the Abbot of Westminster. Situated as it is in the southern part of Hampstead Heath, the area was, in years past, referred to as nearby South End Green. When the now-lost great oak tree of Gospel Oak became famous as a preaching spot in the 1700s, the area was referred to as Gospel Oak, and the name continues today.

The neighbourhood began serious development in the mid-1800s when Lord Mansfield, Lord Southampton and Lord Lisburne were the local landowners. Plans were drawn up for elegant streets radiating from Lismore Circus but after two railway lines were extended across the area in the 1860s the first buildings were two- and three-story cottages, based around present-day Oak Village. The area was for many years rather remote from the rest of the wider Kentish Town development and streets were not fully completed and the housing stock was regarded as relatively sub-standard.

During this early building period, there was a risk that Parliament Hill Fields (the southernmost part of Hampstead Heath, entered from the ‘Gospel Oak Entrance’ near Gospel Oak station) would be built over. In the 1840s, Lord Southampton’s estate initially proposed building on the fields, but a campaign led to the fields being bought in 1889 by the Metropolitan Board of Works as an extension to the already protected Hampstead Heath. The fields now host Parliament Hill itself, the Parliament Hill Lido, an athletics running track, a bandstand, café and various children’s play areas.

On the evening of 2 September 1861, an excursion train returning from Kew Gardens hit an empty train on the bridge next to Gospel Oak station. The engine left the line and plunged down the embankment, killing 14 and injuring 300.

A curious story of Victorian Gospel Oak relates to a story that appeared in the local press of the time, called "The Elephants of Gospel Oak". In March 1884, Sangers Circus was booked to perform at Gospel Oak (presumably on Parliament Hill Fields). Four elephants were transported by train to Kentish Town but on leaving the train, two of the elephants bolted and ran up Fortess Road, knocking over a child, running further beyond Tufnell Park station and ending up falling into cellars in Pemberton Gardens. The other two elephants were then drafted to pull out the trapped elephants using ropes. All four elephants then paraded down the streets of Dartmouth Park, accompanied by hundreds of onlookers, arriving back at Gospel Oak where the elephants performed to packed audiences.

Later development including the areas of the Mansfield Conservation area to the west of Gospel Oak station led to the neighbourhood becoming more respectable and solidly residential - although in 1909 when John Betjeman's family moved to the more affluent Highgate they obviously felt that they were a cut above Gospel Oak:

Here from my eyrie, as the sun went down,
I heard the old North London puff and shunt,
Glad that I did not live in Gospel Oak.

Bombing during the 1940s and post-war regeneration affected Gospel Oak considerably. During World War Two, the area around Gospel Oak station was bombed, and on the night of 16 November 1940, Mansfield Road School (Gospel Oak Primary School is now on this site) and other parts of Gospel Oak were bombed. The school was acting as a fire station at the time and 4 local residents died and many more injured. The present-day school was subsequently built on the site, and the damaged Victorian houses opposite were torn down to make way for the more modern estates that are seen today.

Topography: One of ‘London’s lost rivers’ the River Fleet flows hidden under Gospel Oak, following the line of Fleet Road, and crossing under Southampton Road, Kingsford Road and continuing along the line of Malden Road to eventually meet the Thames. 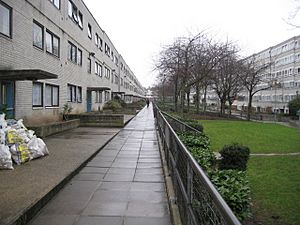 A view of the Lismore Circus Estate, two parallel blocks of continuous housing units dating from the early 1970s.

Gospel Oak is well-served by the London Overground network, with Gospel Oak station being the start of the Gospel Oak to Barking line as well as an intermediate stop on the North London Line.

Kentish Town station situated 1 mile away is served by Thameslink.

Gospel Oak sits between the High Barnet and Edgware branches of the Northern line.

The nearest stations are Tufnell Park, Belsize Park and Kentish Town, which are all situated within a 1-mile radius.

The 24 bus runs from Pimlico to Hampstead Heath to the west of Gospel Oak.

The area is also served by the 88 bus which runs from Clapham Common to Parliament Hill Fields.

All content from Kiddle encyclopedia articles (including the article images and facts) can be freely used under Attribution-ShareAlike license, unless stated otherwise. Cite this article:
Gospel Oak Facts for Kids. Kiddle Encyclopedia.