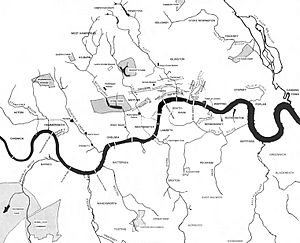 A sketch map of some lost rivers 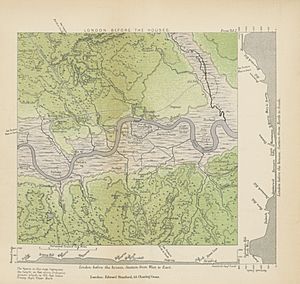 "London Before the Houses", map of pre-urban London from 1884. 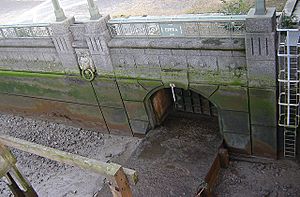 This position of a mouth of the Effra was made in the 13th century, reducing the winter marshiness of much of Southwark, it is today a combined sewer overflow. Storm combined (foul and surface water) sewerage flows into the Tideway by Vauxhall Bridge, with others pouring billions of such litres into this upper estuary each year, which can take 30 days to reach the sea, but will be properly treated by means of the Thames Tideway Tunnel

The subterranean or underground rivers of London are or were the direct or indirect tributaries of the upper estuary of the Thames (the Tideway), that were built over during the growth of the metropolis of London. They now flow through culverts, with some of them now integral parts of London's sewerage system and diverted accordingly. 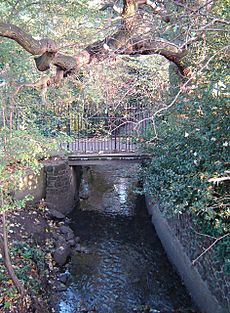 The Moselle is visible above ground flowing through Tottenham Cemetery on its way to the Lea.

North of the River Thames 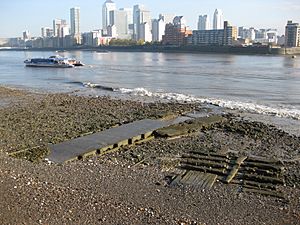 The culverted mouth of the Earl's Sluice at Deptford Wharf

South of the River Thames

In June 2008, the office of Mayor of London published outline plans to reinstate some underground rivers. In January 2009, a partnership among the Environment Agency, Natural England, The River Restoration Centre, and the Greater London Authority set out a strategy for putting this into effect by creating the London Rivers Action Plan.

All content from Kiddle encyclopedia articles (including the article images and facts) can be freely used under Attribution-ShareAlike license, unless stated otherwise. Cite this article:
Subterranean rivers of London Facts for Kids. Kiddle Encyclopedia.