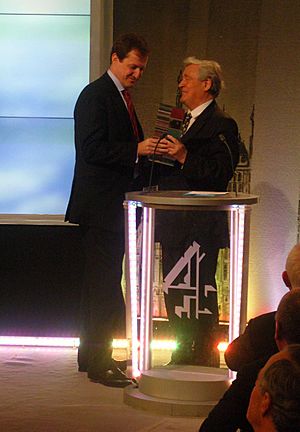 Alastair Campbell seen on the left

Alastair John Campbell (born 25 May 1957) was the Director of Communications and Strategy for the Prime Minister of the United Kingdom (Tony Blair) between 1997 and 2003.

He used to work for the Daily Mirror as their politics reporter, and was an alcoholic. Then he had a breakdown, gave up drinking, and started working for Tony Blair in 1994. He was seen as one of the main spin doctors in the Labour Party. He eventually resigned over the 45 minute claim in the dossier prepared over the Iraq War, after the Hutton report had come out and Dr. David Kelly was dead.

He currently works as a broadcaster, journalist and spokesman for Leukaemia Research. He is said to be re-joining the Labour campaign team for the 2010 election. He is an atheist.

All content from Kiddle encyclopedia articles (including the article images and facts) can be freely used under Attribution-ShareAlike license, unless stated otherwise. Cite this article:
Alastair Campbell Facts for Kids. Kiddle Encyclopedia.