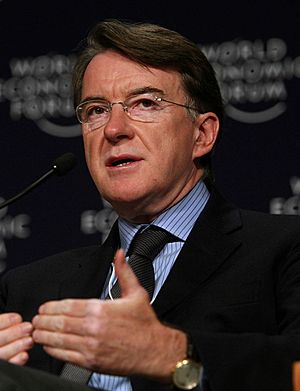 Peter Benjamin Mandelson (born 21 October 1953) is a British politician for the Labour Party. He helped to found the so-called 'New Labour' with Tony Blair and Gordon Brown. He was the Member of Parliament for Hartlepool from 1992-2004.

Lord Mandelson lost his job twice, once in 1998 for not declaring a loan he was given to buy a house, and once in 2001 for trying to arrange a passport for an Indian businessman who had given £1,000,000 to the Labour Party. He later made a speech claiming to have "inner steel".

After Gordon Brown became Prime Minister, he made Mandelson a Life Peer, and some newspapers have called him "the most powerful man in the Labour Party".

Mandelson is gay (he was outed in 1998 by openly gay journalist Matthew Parris), which led some to claim the UK was being run by a gay mafia.

All content from Kiddle encyclopedia articles (including the article images and facts) can be freely used under Attribution-ShareAlike license, unless stated otherwise. Cite this article:
Peter Mandelson Facts for Kids. Kiddle Encyclopedia.