Born in Bellshill to working-class, Roman Catholic parents, Reid first became involved in politics when he joined the Young Communist League in 1972. He later joined the Labour Party, working for them as a senior researcher before being elected to the House of Commons in 1987 as the MP for Motherwell North.

He retired from front-line politics in 2007 following Gordon Brown's appointment as Prime Minister, taking on a role as the Chairman of Celtic Football Club. He later stepped down as an MP in 2010, and was elevated to the House of Lords. 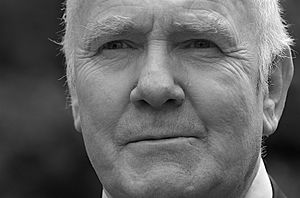 On 28 September 2007, it was announced Reid would become Chairman of Celtic Football Club.

In late 2008 it was announced that Reid would be taking up the post of honorary Professor at the University College London and become the chairman of the newly created Institute of Security and Resilience Studies (ISRS) at UCL.

On 18 December 2008 G4S (Group 4 Securicor) announced that Reid would be taking up a post with the company as group consultant.

Reid is currently a member of the Top Level Group of UK Parliamentarians for Multilateral Nuclear Disarmament and Non-proliferation, established in October 2009.

In June 2009, Reid was awarded an honorary degree from Stirling University "for his contribution to public affairs".

All content from Kiddle encyclopedia articles (including the article images and facts) can be freely used under Attribution-ShareAlike license, unless stated otherwise. Cite this article:
John Reid, Baron Reid of Cardowan Facts for Kids. Kiddle Encyclopedia.