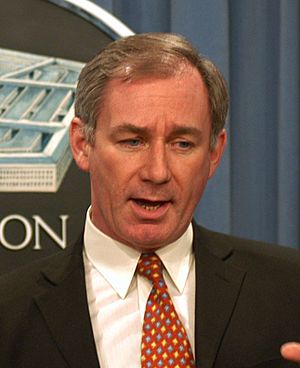 Geoff Hoon at The Pentagon

Geoffrey William Hoon (born 6 December 1953) is an English politician and held several government posts. He was born in Derby. He was the Member of Parliament for the Ashfield constituency in the United Kingdom from his first elected in the 1992 general election until he retired in 2010.

Hoon is a member of the Labour Party.

All content from Kiddle encyclopedia articles (including the article images and facts) can be freely used under Attribution-ShareAlike license, unless stated otherwise. Cite this article:
Geoff Hoon Facts for Kids. Kiddle Encyclopedia.