Jesus College is a constituent college of the University of Cambridge, England. The college's full name is The College of the Blessed Virgin Mary, Saint John the Evangelist and the glorious Virgin Saint Radegund, near Cambridge. Its common name comes from the name of its chapel, Jesus Chapel.

Jesus College was established between 1496 and 1516 on the site of the twelfth-century Benedictine nunnery (a place where nuns live) of St Mary and St Radegund by John Alcock, then Bishop of Ely. The cockerel is the symbol of Jesus College, after the surname of its founder.

Jesus College is Cambridge’s third-wealthiest college. The college is known for its particularly expansive grounds which include its sporting fields and for its close proximity to its boathouse.

Ian White, current van Eck Professor of Engineering in the university, has been master of Jesus College since 2011. 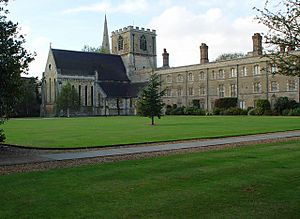 When founded in 1496, the College consisted of buildings taken over from the Nunnery of St Mary and St Radegund, which was founded at the beginning of the 12th century; the Chapel is the oldest university building in Cambridge still in use, and predates the foundation of the College by 350 years, the University by half a century.

Jesus College admits undergraduate and graduates students to all subjects at the university though typically accepts a larger number of students for engineering, medicine, law, natural sciences, mathematics, economics, history, languages, and human, social and political sciences. The college offers a wide range of scholarships.

All content from Kiddle encyclopedia articles (including the article images and facts) can be freely used under Attribution-ShareAlike license, unless stated otherwise. Cite this article:
Jesus College, Cambridge Facts for Kids. Kiddle Encyclopedia.