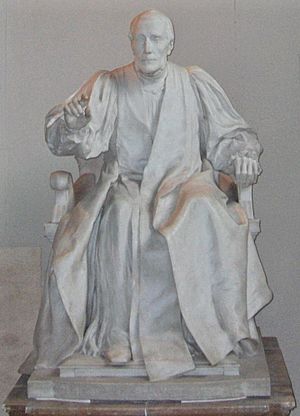 The statue of John Alcock in Worcester Cathedral

He was born at Beverley in Yorkshire, son of Sir William Alcock, Burgess of Kingston upon Hull and educated at Cambridge. In 1461 he was made dean of Westminster, and his subsequent promotion was rapid in both church and state. In 1461 he was made Master of the Rolls, and in 1470 was sent as ambassador to the court of Castile. He became Bishop of Rochester on 15 March, Bishop of Worcester on 15 July 1476 and of Ely on 6 October 1486. He was Lord Chancellor, once from June 1475 to September 1475 and then again from October 1485 to March 1487.

Alcock was one of the leading pre-Reformation churchmen; he was a man of deep learning and also a great architect. He founded a charity at Beverley and a grammar school at Kingston upon Hull. He restored many churches and colleges, but his greatest achievement was the building of Jesus College, Cambridge.

Alcock died on 1 October 1500 and lies buried in the Alcock Chantry in Ely Cathedral.

All content from Kiddle encyclopedia articles (including the article images and facts) can be freely used under Attribution-ShareAlike license, unless stated otherwise. Cite this article:
John Alcock (bishop) Facts for Kids. Kiddle Encyclopedia.