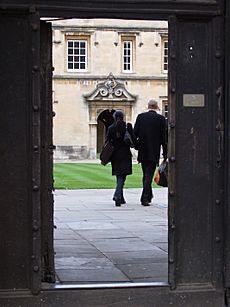 An Oxbridge college seen from the outside

The word 'Oxbridge' started because the two universities are very similar:

The competition between Oxford and Cambridge also has a long history, dating back to the days when Cambridge was founded by unsatisfied scholars from Oxford.

All content from Kiddle encyclopedia articles (including the article images and facts) can be freely used under Attribution-ShareAlike license, unless stated otherwise. Cite this article:
Oxbridge Facts for Kids. Kiddle Encyclopedia.