The Boat Race facts for kids 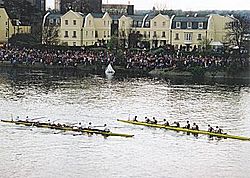 The Boat Race is a rowing race that happens every year in London. It is a race between the boat clubs of Cambridge University and Oxford University. The crews are made up of students. These two universities have a strong tradition in rowing and a strong rivalry between them.

The course is 4 miles long, along the River Thames. The first boat race was in 1829, and it is usually held on the last Sunday of March or the first Sunday of April. During the World Wars, the Boat Race did not happen. It is a very important sporting event in the United Kingdom. Millions of people watch it on television. In 2009, more than 250,000 people watched it along the river.

All content from Kiddle encyclopedia articles (including the article images and facts) can be freely used under Attribution-ShareAlike license, unless stated otherwise. Cite this article:
The Boat Race Facts for Kids. Kiddle Encyclopedia.