Barnes is a suburban district in the London Borough of Richmond upon Thames. It is located in the extreme northeast of the borough (and as such is the closest part of the borough to central London). It is centred 5.8 miles (9.3 km) west south-west of Charing Cross in a bend of the River Thames.

Its built environment includes a wide variety of convenience and arts shopping on its high street and a high proportion of 18th and 19th century buildings in the streets near Barnes Pond, which together make up Barnes Village conservation area where along with its west riverside, pictured, most of the mid-19th century properties are concentrated. On the east riverside is the WWT London Wetland Centre adjoining several fields for the three main national team sports. Barnes has retained woodland on the "Barnes Trail" which is a short circular walk taking in the riverside, commercial streets and conservation area, marked by silver discs set in the ground and with QR coded information on distinctive oar signs. The Thames Path National Trail provides a public promenade along the entire bend of the river which is on the Championship Course in rowing. Barnes has two railway stations (Barnes and Barnes Bridge) and is served by bus routes towards central London and Richmond. 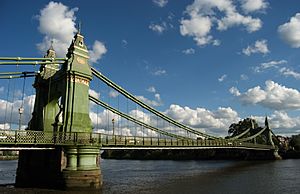 Hammersmith Bridge at the north end links Barnes to the centre of Hammersmith, the nearest entertainment and high rise office area.

Barnes adjoins the South Circular Road and Putney, which forms a rival commercial hub to Hammersmith. Unlike Mortlake and Hammersmith, Barnes has no dual carriageways. The locality is one of a minority at its radius from the centre of London in the early 21st century to be defined by suburban by a Greater London Authority paper.

Its nearest tube station is Hammersmith, which also has bus connections to central London.

Historically part of Surrey, Barnes appears in Domesday Book of 1086 as "Berne". It was held by the Canons of St Paul of London when its assets were: 8 hides, paying tax with Mortlake; 6 ploughlands, 20 acres (81,000 m2) of meadow. It rendered (in total) to its feudal system overlords £7 per year.

The original Norman chapel of St Mary's, Barnes' village church, was built at some point between 1100 and 1150, and was subsequently extended in the early 13th century. In 1215, immediately after confirming the sealing of the Magna Carta, Stephen Langton, the Archbishop of Canterbury, stopped on the river at Barnes to dedicate St Mary's church. The church was added to in 1485 and in 1786. After a major fire in 1978 destroyed the Victorian and Edwardian additions to the building, restoration work was completed in 1984.

Some of the oldest riverside housing in London is to be found on the Terrace, a road lined with Georgian mansions which runs along the west bend of the river. Construction of these mansions began as early as 1720. Gustav Holst and Ninette de Valois lived in houses on this stretch, both of which have corresponding blue plaques. The Terrace also has an original red brick police station, built in 1891. It has been remodelled as flats but still preserves the original features.

The pink-fronted Rose House facing the area's pond dates to the 17th century, while Milbourne House facing the Green, the area's oldest, parts of which date to the 16th century, once belonged to Henry Fielding. The park of Barn Elms, formerly the manor house of Barnes, for long the parish's chief property and now an open space and playing field, is believed to be home to the oldest and largest plane tree in London.

The Grade II listed Barnes Railway Bridge, originally constructed in 1849 by Joseph Locke, dominates the view of the river from the Terrace. In 2009, a project began to re-paint the bridge.

Castelnau, in north Barnes and on the banks of the river, has a small church, Holy Trinity. The area between Castelnau and Lonsdale Road contains a 1930s council estate (including roads such as Nowell Road, Stillingfleet Road and Washington Road), mostly consisting of "Boot Houses", constructed by the Henry Boot company.

Entrance to the visitors centre at the WWT London Wetland Centre; on the left is the statue of Peter Scott by Nicola Godden 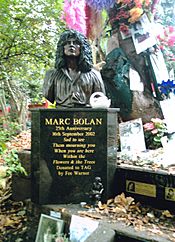 Marc Bolan's shrine, on what would have been his 60th birthday, 30 September 2007

Barnes Pond with the Sun Inn in the background 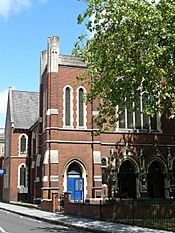 The Methodist Church by Barnes Pond

Barnes Common is an important open space and a local nature reserve. Its 120 acres (0.49 km2) dominate the south of Barnes, providing a rural setting to the village and a wealth of habitats including acid grassland, scrub, woodland and wetland. Beverley Brook passes through part of the common before meeting the Thames at Putney.

In April 2001, Barnes Pond dramatically emptied overnight. Although a broken drain was suspected no cause could be conclusively found. The pond was redeveloped and landscaped with funding from Richmond Council and the local community.

Barn Elms reservoirs were turned into a wetland habitat and bird sanctuary in 1995. The majority of the WWT London Wetland Centre comprises areas of standing open water, grazing marsh and reedbed. It is designated as a Site of Special Scientific Interest as it supports nationally important wintering populations of shoveller (Anas clypeata) and teal (Anas crecca).

The Barnes Trail, a 2.3 mile circular walk funded by the Mayor of London and Richmond upon Thames Council, was opened in June 2013. It gained in 2014 a further QR code-marked extension, along its riverside, which equates to the Thames Path National Trail; part of this is wide, pavemented embankments with Victorian townhouses and the rest is tree-lined green space.

The site of rock musician Marc Bolan's fatal car crash on Queen's Ride in 1977 is now Bolan's Rock Shrine. The memorial receives frequent visits from his fans, and in 1997 a bronze bust of Bolan was installed to mark the twentieth anniversary of his death. In 2007, the site was recognised by the English Tourist Board as a "Site of Rock 'n' Roll Importance" in its guide England Rocks.

A cinema, Olympic Studios on Church Road, is independent, showing a mixture of films on general release and art films. Originally a local cinema and for many years a leading recording studio, down the decades Olympic played host to some of rock and pop's greatest stars, from the Beatles, who recorded the original tracks of "All You Need Is Love" in Barnes, to the Rolling Stones, Jimi Hendrix, Pink Floyd, Led Zeppelin, David Bowie, Queen, Eric Clapton, Ella Fitzgerald, Harry Nilsson, the Verve, Massive Attack, Duran Duran, Coldplay, Madonna and Björk.

Facing the Thames, and on the main commercial street's junction, the Bull's Head pub is known as the "suburban Ronnie Scott's" and was one of the first and most important jazz venues in Britain from the post-war years onward.

The Old Sorting Office Arts Centre is a venue for art and fringe theatre, hosting numerous exhibitions and theatre productions, as well as a regular auction. Actors who have performed at the venue include Patricia Hodge, Stephanie Cole, Timothy West, Julian Glover and Robert Pattinson.

The area around Barnes Pond is host to several open-air and covered markets each month. Barnes Green is the site of the Barnes Fair, held each year on the second Saturday of July and organised by the Barnes Community Association (BCA), whose headquarters is at Rose House, a distinctive 17th century pink-painted building on Barnes High Street.

Barnes has eight churches, of which six are members of Churches Together in Barnes:

To give an equal councillor number and electorate, the wards in the London Borough of Richmond upon Thames are multi-councillor but aim to be equally sized. To achieve this, approximately half of one of the two wards covering modern Barnes also falls within the boundaries of neighbouring Mortlake.

All content from Kiddle encyclopedia articles (including the article images and facts) can be freely used under Attribution-ShareAlike license, unless stated otherwise. Cite this article:
Barnes, London Facts for Kids. Kiddle Encyclopedia.