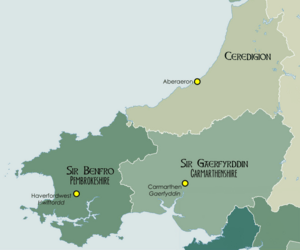 West Wales (Welsh: Gorllewin Cymru) is not clearly defined as a particular region of Wales. Some definitions of West Wales include only Pembrokeshire, Ceredigion and Carmarthenshire, which historically comprised the Welsh principality of Deheubarth and was called "South West Wales" in the Nomenclature of Territorial Units for Statistics (NUTS). Other definitions may include Swansea and Neath Port Talbot but exclude Ceredigion, although this definition may also be described as South West Wales. As 75% of the Welsh population live in South Wales, many South Walians simply think of West Wales as the West side of South Wales and East Wales as the East side of South Wales. The "West Wales and the Valleys" NUTS area includes more westerly parts of North Wales.

The preserved county of Dyfed covers what is generally considered to be West Wales; between 1974 and 1996, Dyfed was a county, with a county council and six district councils.

Historically, the term West Wales was applied to the Kingdom of Cornwall during the Anglo-Saxon invasion of Britain and the period of the Heptarchy. The Old English word Wealas, meaning "foreigners" in the sense of Britons, gave its name to Wales and was also applied to Cornwall, as "West Wealas" to mean western foreigners.

All content from Kiddle encyclopedia articles (including the article images and facts) can be freely used under Attribution-ShareAlike license, unless stated otherwise. Cite this article:
West Wales Facts for Kids. Kiddle Encyclopedia.