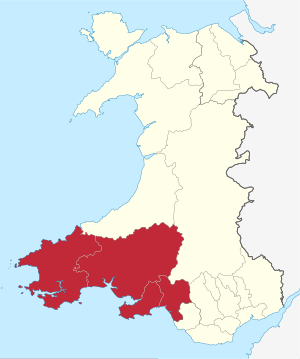 South West Wales is a region of Wales consisting of the unitary authorities of Swansea, Neath Port Talbot, Pembrokeshire and Carmarthenshire.

This definition is used by a number of government agencies and private organisations including:

A different definition is used in the EU Nomenclature of Territorial Units for Statistics, which refers to South West Wales as a subdivision of West Wales and the Valleys comprising Carmarthenshire, Ceredigion and Pembrokeshire.

All content from Kiddle encyclopedia articles (including the article images and facts) can be freely used under Attribution-ShareAlike license, unless stated otherwise. Cite this article:
South West Wales Facts for Kids. Kiddle Encyclopedia.