Castelnau is a road in Barnes, in the London Borough of Richmond upon Thames, south west London, approximately 5.1 miles (8.2 km) west from Charing Cross on the south side of the River Thames. About 1.1 miles (1.8 km) long, it is the main road south from Hammersmith Bridge and forms part of the A306 road. It was originally named Upper Bridge Road.

An area of Barnes including Castelnau was designated a conservation area in 1977.

The name Castelnau is also used informally for Castelnau Estate (see below).

Three different English pronunciations of the word "Castelnau" seem to be in current use, all differing only in the final vowel: "castle know" is more ancient, and resembles the original French vowel, "castle now" is perhaps used to match with Nassau Road in the area, and "castle gnaw" is favoured by more recent inhabitants.

Castelnau takes it name from Castelnau-le-Lez, near Montpellier in France: in 1691, the 10th Baron of Castelnau and St Croix, a Huguenot, fled France for England following persecution, and his son, Charles Boileau, settled in north Barnes and his descendants developed parts of the area.

Castelnau was developed after the opening of Hammersmith Bridge in 1827. 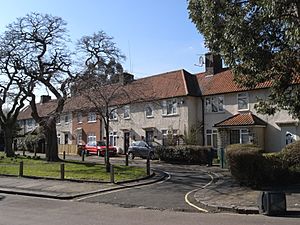 In 1926, London County Council built a cottage estate of 640 houses, called Castelnau Estate, on the site of a market garden. In 1971 these passed to ownership of Richmond upon Thames Council. Many are now privately owned. Many of the roads in this estate are named after Deans of St. Paul's who had been Lords of the manor of Barnes between the 14th and 17th centuries: Everdon, Kilmington, Alderbury, Kentwode, Howsman and Stillingfleet. 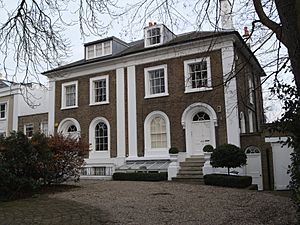 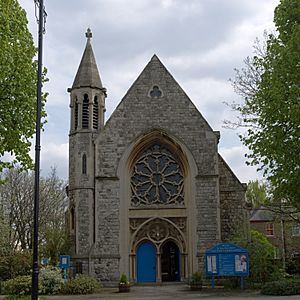 Castelnau is noted for 20 pairs of exceptional classical villas which were built in 1842 by Major Boileau (see above). There are also two churches:

All content from Kiddle encyclopedia articles (including the article images and facts) can be freely used under Attribution-ShareAlike license, unless stated otherwise. Cite this article:
Castelnau, London Facts for Kids. Kiddle Encyclopedia.