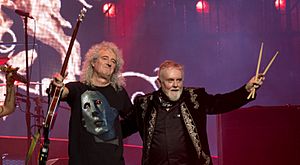 The two remaining members of Queen's classic line-up, May and Taylor (pictured in 2017), were creative consultants for Bohemian Rhapsody 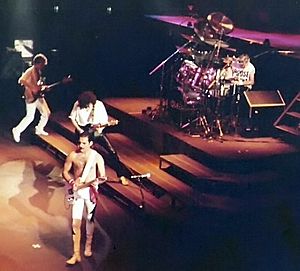 Queen on stage in Frankfurt on 26 September 1984. Compatible with his performance and compositions, Mercury was also a multi-instrumentalist. 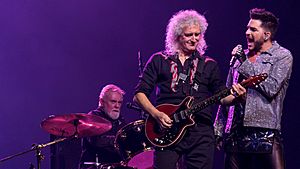 Queen performing with Adam Lambert during their 2017 tour

Queen are a British rock band that formed in London in 1970. They are one of the most commercially successful music acts of all time, selling over 300 million records worldwide. The members were Freddie Mercury (lead vocals, piano), Brian May (lead guitar, vocals), Roger Taylor (drums, vocals), and John Deacon (bass guitar).

Freddie Mercury died of an AIDS-related bronchopneumonia on November 24, 1991. In 1997 John Deacon retired to spend more time with his family. The other two former members toured with Paul Rodgers from 2005 to 2009. In December 2018 it was announced Queen & Lambert will bring its Rhapsody Tour to The Forum in 2019. Three of their biggest hits were "Bohemian Rhapsody, "We Will Rock You", and "We Are the Champions".

Queen was inducted into the Rock and Roll Hall of Fame in 2001.

With his friend Tim Staffell, Brian May started a band called 1984 in the mid 1960's. The band broke up after a little bit and then May decided to make another band and teamed up with two other college students named Tim Staffell and Roger Taylor. They called themselves "Smile" with Roger Taylor on drums and vocals, Tim Staffell on vocals and bass and Brian May on guitar and vocals. They did a few hits such as "April Lady". Tim Staffell became friends with another college student, Farrokh Bulsara (to be later known as Freddie Mercury) and Farrokh became a big fan of "Smile" and encouraged them a lot. Later on, Tim left "Smile" to join "Humpy Bongs" and Farrokh Bulsara subsequently joined the band on vocals and piano in 1970. Then Farrokh came up with the name "Queen", so they changed it from "Smile" to "Queen". They then started auditions for a new bassist. They were going through several bassists during this time and none of them stuck, only lasting for about a few minutes. None of the auditioners managed to suit the place of the new bassist, but finally in 1971, they settled on John Deacon. Queen's first album was released in 1973 and it was called "Queen" with songs such as "Seven Seas Of Rhye" and "Liar". Farrokh Bulsara changed his name to Freddie Mercury after the lyrics "Mother Mercury, look what they've done to me" in "My Fairy King". Brian May has a degree in Astrophysics.

Released in October 2018, Bohemian Rhapsody focuses on Queen's formative years and the period leading up to the celebrated performance at the 1985 Live Aid concert. The film has grossed over $900 million worldwide, making it the highest-grossing musical biographical film of all time. Despite receiving mixed reviews, it won the Golden Globe Award for Best Motion Picture – Drama. Malek received wide acclaim and numerous accolades for his portrayal of Mercury, including the Academy Award for Best Actor.

All content from Kiddle encyclopedia articles (including the article images and facts) can be freely used under Attribution-ShareAlike license, unless stated otherwise. Cite this article:
Queen (band) Facts for Kids. Kiddle Encyclopedia.