John Richard Deacon (born 19 August 1951) is an English retired musician, best known for being the bass guitarist for the rock band Queen. He composed several singles for the group—including Top 10 hits "You're My Best Friend", "Another One Bites the Dust", "Back Chat", and "I Want to Break Free"—and was involved in the band's financial management.

Deacon grew up in Oadby, Leicestershire, playing bass in a local band, The Opposition, before moving to study electronics at Chelsea College, London. He joined Queen in 1971 on the strength of his musical and electronic skills, particularly the home-made Deacy Amp which guitarist Brian May used to create guitar orchestras throughout Queen's career. From the third album, Sheer Heart Attack, onwards, he wrote at least one song per album, several of which became hits. As well as bass, Deacon played some guitar and keyboards on Queen's studio work, but was the only member never to sing on their records. 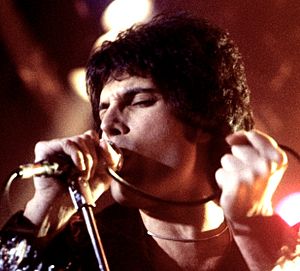 Deacon was upset by Mercury's death in November 1991, which was a trigger to reducing his musical activity. He later said, "As far as we are concerned, this is it. There is no point carrying on. It is impossible to replace Freddie." After playing live with Queen three more times – at The Freddie Mercury Tribute Concert for AIDS Awareness on 20 April 1992, in a charity concert with Roger Taylor in Midhurst on 18 October 1993, and at the opening of the Bejart Ballet in Paris on 17 January 1997, performing only "The Show Must Go On" with Elton John on lead vocals – he made the decision to retire from music, re-appearing only briefly by joining his former band mates in October 1997 for the recording of the final Queen song "No-One but You (Only the Good Die Young)", included on the Queen Rocks album released a month later.

Deacon has in general stayed out of the public eye since retiring. Deacon is still involved on the business side of Queen but chooses to stay out of the limelight. It is confirmed confirmed that Deacon approves the making of Freddie Mercury biopic. In 2013, a newly-discovered species of the genus Heteragrion (Odonata : Zygoptera) from Brazil was named Heteragrion johndeaconi after Deacon, in honour of his musical and songwriting skills.

Deacon has often been described as the "quiet" member of the band. Although the rest of the band felt he was the right bass guitarist for them, he barely spoke in rehearsals and avoided arguments. He lives in Putney in Southwest London with his wife Veronica Tetzlaff, whom he married on 18 January 1975, and is the father of six children. One of the reasons for Queen splitting from Trident, their original management company, is that it refused to lend Deacon money to put a deposit on a house.

Queen songs Deacon wrote that were released as singles:

All content from Kiddle encyclopedia articles (including the article images and facts) can be freely used under Attribution-ShareAlike license, unless stated otherwise. Cite this article:
John Deacon Facts for Kids. Kiddle Encyclopedia.