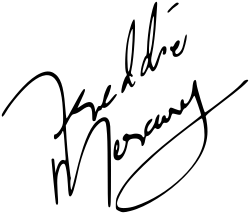 Freddie Mercury, record producer and lead vocalist of the rock band Queen. He is regarded as one of the greatest singers in the history of popular music, and was known for his flamboyant stage persona and four-octave vocal range.

Mercury was born in Zanzibar to Parsi parents from India. After growing up in Zanzibar and then India, his family moved to Middlesex, England, in his late teens. He formed Queen in 1970 with guitarist Brian May and drummer Roger Taylor. Mercury wrote numerous hits for Queen, including "Bohemian Rhapsody", "Killer Queen", "Somebody to Love", "Don't Stop Me Now", "Crazy Little Thing Called Love", and "We Are the Champions". He also led a solo career and served as a producer and guest musician for other artists. Mercury died in 1991 at age 45 due to complications from AIDS, having confirmed the day before his death that he had contracted the disease.

As a member of Queen, Mercury was inducted into the Rock and Roll Hall of Fame in 2001, the Songwriters Hall of Fame in 2003, and the UK Music Hall of Fame in 2004. In 1992, a year after his death, he was awarded the Brit Award for Outstanding Contribution to British Music, and a tribute concert was held at Wembley Stadium, London. In 2002, he placed number 58 in the BBC's 2002 poll of the 100 Greatest Britons. The 2018 film about Mercury and Queen, Bohemian Rhapsody, is the highest-grossing musical biographical film of all time.

Mercury was born in Stone Town in Zanzibar in Africa. His parents were Jer and Bomi Bulsara. They were both Persian. His father worked as a cashier in the British Colonial Office, a branch of the government. Mercury had a younger sister named Kashmira. His friends at school gave him the name "Freddie." His family then began calling him Freddie, too.

At age eight, Mercury was sent to a boarding school in India. The school, St. Peters English Boarding school in Panchgani, was about 50 miles outside the city of Bombay (now called Mumbai). He began to show talent as an artist and a sportsman. At age ten, he was named the school champion of Table Tennis. When he was twelve, he received a trophy called the Junior All-rounder.

While in school he joined a choir and began to learn to play the piano. He had a four octave vocal range. To be able to reach very high notes while singing is unusual for a man.

In 1964, Mercury moved to London with his family. He studied art at Ealing Art College. While in London, he became fond of Mary Austin, a woman he met though his guitarist, Brian May. They lived together for several years before and after the band became famous. They moved into a house in London nicknamed "The Court of King Freddie". Mary still lived in that house after she and Mercury broke up.

Mercury was in love with a local barber when he died. They had been in a relationship for six years when it was learned by the media that Mercury had AIDS. One day after the news was broadcast, Mercury died of a type of pneumonia caused by AIDS, on 24 November 1991.

All content from Kiddle encyclopedia articles (including the article images and facts) can be freely used under Attribution-ShareAlike license, unless stated otherwise. Cite this article:
Freddie Mercury Facts for Kids. Kiddle Encyclopedia.