West Kensington is an area of West London primarily located within the London Borough of Hammersmith and Fulham, encompassing some western areas of the Royal Borough of Kensington and Chelsea, located 3.4 miles (5.5 km) west of Charing Cross. West Kensington, the London postal area of W14 is roughly defined as the area between Brook Green & Hammersmith Road to the west, Fulham to the south, Shepherd's Bush to the north and Kensington to the east.

It is best known as home to the Olympia Exhibition Centre and the Queen's Club at Barons Court. 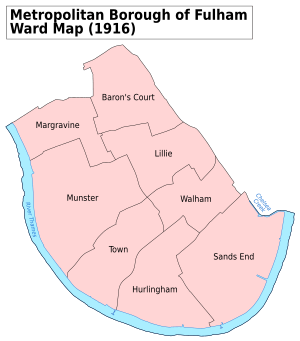 A map showing the wards of Fulham Metropolitan Borough as they appeared in 1916.

In 1876 William Henry Gibbs and John P. Flew, builders from Dorset, decided to capitalise on their modest success in Kensington, by recreating another 'South Kensington' on the market gardens west of the West London Railway. They built 1,200 houses in the village of North End in the parish of Fulham. However, the housing slump of the 1880s left them with many unsold properties. Their response was two-fold, to have North End renamed as 'West Kensington' and to build a bridge over the railway, from their estate to link with the Cromwell Road in fashionable Kensington. They succeeded with the first plan, but the second led to bankruptcy and the dissolution of the partnership in 1885. However, the campaign for the bridge was taken up by local residents and the West Cromwell Road bridge was eventually commenced in 1938 and opened in 1942. Gibbs and Flew thereafter carried on separate businesses with a measure of success in Fulham.

West Kensington is primarily a residential area consisting mainly of Victorian terraced houses, many of which are subdivided into flats. There are excellent examples of Victorian architecture, with several houses and some entire streets listed – including the imposing mansion blocks of Fitzgeorge Avenue (off North End Road) and the mansion blocks around Avonmore Road including, Glyn Mansions (Built 1897), Avonmore Mansions and Avonmore Gardens (Built 1893) which is located next to the new Kensington Village development. West Kensington Court was purpose built and completed in 1938 with a view of providing what were considered at the time luxury flats for young professionals and families wishing to move from older-style properties. There are also a number of ex-local authority and local authority buildings around the North End Road, including the recently renovated Lytton Estate. Many of buildings have been sold off. A more recent private development, St Paul's Court, was built in 1980 on the former site of St Paul's School.

West Kensington is a cosmopolitan enclave. There are significant populations of Arabs, Americans, Australians, New Zealanders, Irish, Italian, Spanish, and French, for some of which private schools teaching in their native language can be found around Brook Green. The area also has a large student population, as it is close to Imperial College London, Charing Cross Hospital, South Kensington, Hammersmith and other Central London Universities.

West Kensington has a major advantage in its location. Spill-over wealth from Kensington (W8) means that the area has brought more speciality shops, catering establishments and other developments. West Kensington straddles the border between the boroughs of Hammersmith & Fulham and Kensington & Chelsea. Although the area has not experienced the same level of investment and rejuvenation as neighbouring Earl's Court and Fulham, new building and renovation work continue. W14 became the first London postcode area without a post office, until a sub-post office agreement was reached with North End News in February 2009.

Nearest locations and places of interest

Blythe House has been used as a filming location for numerous films including Tinker Tailor Soldier Spy.

In the film Trainspotting, the flat that Renton shows the young couple around when he gets the job as an estate agent and ultimately stashes Begbie and Sickboy in is 78A North End Road, opposite West Kensington tube station.

The Nashville Rooms, now the Famous Three Kings pub, hosted many rock and punk concerts in the 1970s and early 1980s. Joy Division, The Sex Pistols and The Police all played there regularly.

In Hanif Kureishi's novel The Buddha of Suburbia, the main character moves from the southern suburbs of London to West Kensington and lives by the Nashville. He witnesses one of the first presentations of a punk band, probably The Sex Pistols.

The flat featured in the 1969 BBC series 'Take Three Girls' was at 17 Glazbury Road.

The London Borough of Hammersmith & Fulham and the Royal Borough of Kensington & Chelsea have resolved to grant outline planning permission for Sir Terry Farrell's Masterplan for the Earl's Court Project. As the Earls Court Project would bring considerable benefits to the area, it was recognised by the Mayor’s London Plan as an Opportunity Area in July 2011. The project, expected to span 15-20 years, would involve the redevelopment of the land around the Earl's Court Exhibition Centres and the West Kensington & Gibb's Green Estate. The proposals include the redevelopment and creation of four new village centres around North End Road, West Kensington, West Brompton and Earl's Court.

All content from Kiddle encyclopedia articles (including the article images and facts) can be freely used under Attribution-ShareAlike license, unless stated otherwise. Cite this article:
West Kensington Facts for Kids. Kiddle Encyclopedia.