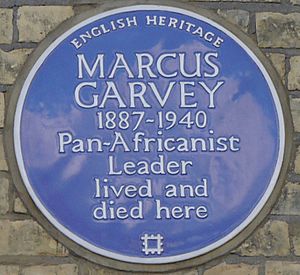 Marcus Mosiah Garvey, Jr., ONH (17 August 1887 – 10 June 1940), was a Jamaican political activist leader. He started the Universal Negro Improvement Association and African Communities League. He influenced Rastafarians and the Nation of Islam. Garvey died of a stroke in London on June 10, 1940. He was 52.

Garvey was born in Jamaica. He left Jamaica in 1910. He lived in Costa Rica for a few months. In 1912 he moved back to Jamaica. The Marcus Garvey Award is given each year to a Jamaican by JAM.

All content from Kiddle encyclopedia articles (including the article images and facts) can be freely used under Attribution-ShareAlike license, unless stated otherwise. Cite this article:
Marcus Garvey Facts for Kids. Kiddle Encyclopedia.