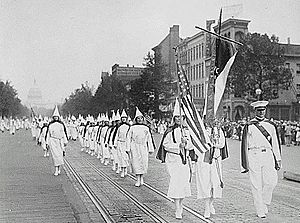 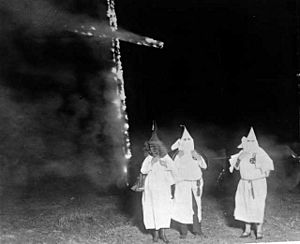 The Ku Klux Klan is a hate group. It was started in the southern United States on March 3, 1865. Most of its hate has been towards African Americans, but it has also attacked Catholics, Jews and immigrants. It has sought to keep "white power", often through very violent acts such as killing people. The first Ku Klux Klan broke up and does not exist anymore. However, other groups with the same name and the same ideas have been created.

The Ku Klux Klan (acronym KKK) is an organization which was started in Pulaski, Tennessee in 1865. This was after the American Civil War. It started as a social club for former Confederate soldiers. The Klan quickly became a terrorist organization. Its aim was to resist the Reconstruction of the United States.

All content from Kiddle encyclopedia articles (including the article images and facts) can be freely used under Attribution-ShareAlike license, unless stated otherwise. Cite this article:
Ku Klux Klan Facts for Kids. Kiddle Encyclopedia.