Kensal Green (or Kensal Rise) is an area in north-west London. It lies mainly in the London borough of Brent, with a small part to the south within Kensington and Chelsea. Kensal Green is located on the Harrow Road, about 4.4 miles (7.1 km) miles from Charing Cross.

To the west on Harrow Road lies Harlesden while in the opposite direction are Maida Hill and Westbourne. Queens Park and Brondesbury are to the north-east, Willesden is to the north-west, and North Kensington lies to the south separated by the Grand Union Canal and the railway tracks of the Great Western Main Line.

Kensal Green is best known for the Grade I listed on the Register of Parks & Gardens Kensal Green Cemetery.

Kensal Green is a residential area with good transport links to central London, surrounding districts include Willesden to the north, Harlesden to the west, Queens Park to the east and Ladbroke Grove to the south. The area includes College Park, Kensal New Town, Kensal Rise and Queens Park Estate

Originally part of one of the ten manors within the district of Willesden, Kensal Green is first mentioned in 1253, translating from old English meaning the King’s Holt (King’s Wood). Its location marked the boundary between Willesden and the then Chelsea & Paddington, on which it remains today. It formed part of one of ten manors, most likely Chamberlayne Wood Manor, named after Canon Richard de Camera (of the Chambers). In the 15th century the then Archbishop of Canterbury Henry Chichele (1414–1443), acquired lands in Willesden and Kingsbury. In 1443 he found All Souls' College, Oxford and endowed it with the same lands in his will. As a resultant, most of Willesden and Kensal Green remained largely agricultural until the mid-1800s, well into the Victorian era. In 1805, the construction of the Grand Junction Canal passed through the district to join the Regent's Canal at Paddington. As the combined Grand Union Canal, this allowed passage of commercial freight traffic from the Midlands to London Docks, and hence onwards to the River Thames. There were two dairy farms in Kensal Green by the early 1800s, which expanded greatly after the 1864 Act of Parliament which made it illegal to keep cattle within the City of London. Although by the late 1800s residential development had greatly reduced the farmland, still in the 1890s many sheep and pigs were raised in the district. One of the farms later became a United Dairies creamery, supplied by milk trains from Mitre Bridge Junction. St.John's Church was built in 1844 followed by a school and more inns. In 1832 Kensal Green Cemetery was incorporated by Act of Parliament and opened January 1833. This led to a revaluation of the surrounding lands, and in 1835 ecclesiastical commissioners were appointed by the Crown, who reported in 1846 that: "the larger portion of the Prebendal Estates possess, in our opinion, a value far beyond their present agricultural value." 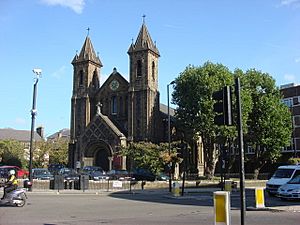 With enough people living locally to create a new parish, in 1844 St. John the Evangelist Church in Kilburn Lane was consecrated. The 1851 census records just over 800 people living in the new parish. In the 1860s, Kensal Green manor house, situated where Wakeman Road joins Harrow Road, was demolished. Rapid increase in residential development followed, firstly with land west of Kilburn High Road, followed by the sale of Banister's Farm leading to the development of Bannister Road and Mortimer Road.Unfortunately at this time Kensal Green was suffering huge social problems and had a reputation of being a slum, with 55% off its residents living in poverty and squalor, despite being neighbours to thriving Queen's Park.The rapid residential development led to local commissioners reporting in 1880 that there was inadequate drainage and sewerage facilities, with most houses having only improved access to what were the old agricultural drains. In that same year, All Souls' College started to develop its lands north west of Kilburn Lane, including All Souls' Avenue and College Road, with adjacent roads being named after leading Fellows of the college, and the installation of new sewerage facilities across the district. The college donated lands on which to build Kensal Rise Reading Room, to commemorate the Diamond Jubilee of Queen Victoria, in 1897. Opened by United States author Mark Twain in 1901, it was later extended and renamed Kensal Rise Library.

The developments of the streets around Kensal Rise railway station date from the last ten years of the 19th century and the first decade of the 20th. Although opened in April 1873 as Kensal Green at Chamberlayne Wood, then a remote dead end road; it was renamed Kensal Rise on 24 May 1890. Just north of the station the National Athletic Ground (one of the many early grounds of Queen's Park Rangers) opened in 1890. The ground which was later renamed the Kensal Rise Athletic Stadium also hosted cycling and athletics competitions before being turned over to housing in the 1920s. For a brief period before 1914 the Aeroplane Building and Flying Society had its headquarters at Kensal Rise and flew test gliders from the site. Kensal Rise also boasted the Electric Pavilion Cinema [1] which opened in November 1914 and was located on the corner of Chamberlayne Road and Bannister Road.

The construction of the Great Western Railway started in 1835, with the first 22.5 miles (36.2 km) of line, from Paddington station to Maidenhead Bridge station, opened on 4 June 1838. In 1901, its major carriage washing and servicing facilities and locomotive depot were developed at Old Oak Common, bringing further employment and more immigrants to the district. The first major immigrant population had been Irish people post the Potato famine, and then post World War I. In World War II, due to the railway facilities, the district suffered greatly from German Luftwaffe bombing.

After the war, the area became a refuge for the first Afro-Caribbean born contingent. In the 1960s the College disposed of many freeholds, while retaining land in Willesden. Since the 1980s, the Irish-born community has reduced in size, although the legacy of their presence remains, not least in the number of Irish pubs and organisations and the many thousands with Irish ancestry that continue to populate the area. According to statistics from the 2001 census, the area has a very high proportion of young residents (28.4% 25–44 years old) and a very high educational level (30.7% hold a first degree or better).

The area has seen significant gentrification over recent years as people have been priced out of surrounding areas such as Notting Hill. In 2015 it was described as 'celebrity haunt-meets-Nappy Valley'. However it retains its character and cultural heritage.

London Overground's North London Line services also operate out of Kensal Rise railway station (Transport for London Travelcard Zone 2) and provides regular services to Richmond in the west, Stratford in the east, and Clapham Junction in the south.

In 2020 the Government gave final approval to the High Speed 2 (HS2) train link running from London to Birmingham. This will bring a major HS2 and Crossrail interchange station at Old Oak Common, within walking distance from Kensal Green. It is expected to open in 2026 and will provide high-speed rail across London and to the Midlands and the North, as well as direct connectivity with the Heathrow Express airport rail link and trains to Wales and the West of England. It will be the largest new railway station ever built in the UK.

At a site just to the east of the Old Oak Common site, Kensington and Chelsea Council have been pushing for a station at Kensal Green Gasworks off Ladbroke Grove & Canal Way, as a turn-back facility will have to be built in the area anyway. Siting it at Kensal Green, rather than next to Paddington itself, would provide a new station to regenerate the area. Amongst the general public there is a huge amount of support for the project and Mayor Boris Johnson stated that a station would be added if it did not increase Crossrail's overall cost. In response, Kensington and Chelsea Council agreed to underwrite the projected £33 million cost of a Crossrail station, which was received well by the residents of the Borough. TfL is conducting a feasibility study on the station and the project is backed by National Grid, retailers Sainsbury's and Cath Kidston, and Jenny Jones (Green Party member of the London Assembly).

Boris Johnson resurrected plans for a Crossrail station at the disused Kensal Gasworks site, between Acton Mainline and Paddington, in 2016. Plans are now being revisited in the hope a development will lead to the construction of up to 5,000 homes and creation of 2,000 jobs. The Mayor commented "We have seen across London how Crossrail is transforming vast swathes of land and acting as a catalyst for much needed new homes and jobs. By looking again at the options for this station we firmly believe that it could have a similar impact, triggering a much-needed fillip for this part of the capital.”

The nearby area of Old Oak Common is one of the capital’s biggest regeneration opportunities since the Olympics. Bordered by Wormwood Scrubs to the south and Willesden Junction to the north, it is a semi-industrial, semi-derelict site of 155 hectares that straddles three London boroughs. Plans include a superhub for the Crossrail and HS2 projects, with the mayor’s office confirming that two new Overground stations, which will connect the site to Kensal Rise, are also part of the plans. Taken as a whole, the railway hub — which will also potentially link to Great Western services and the Heathrow Express — will be roughly the size of Waterloo, the busiest station in the UK. It will also include 24,000 homes as well as retail property and hotels. It has been described as "a Canary Wharf-type development" by Sir Edward Lister, London’s deputy mayor for policy and planning. The project is expected to have a profound impact on London by creating a major commercial district in the West.

The Fork to Fork festival is a one-day festival held in Kensal Rise featuring top London chefs that raises money for charity. 35 restaurants including some Michelin-star took part in the festival which also included demos and talks by chefs and tastings. It was held at Ark Franklin Primary Academy in Harvist Road and raised £60k for the school’s Open Air Classroom project. It is the brainchild of Kensal Rise residents Thomasina Miers, 40, MasterChef winner and co-founder of Mexican restaurant group Wahaca, and Laura Harper-Hinton, 38, co-founder and creative director of Caravan all-day restaurants and specialty coffee business Caravan Coffee Roasters. 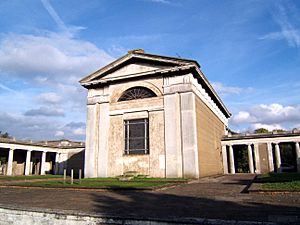 Kensal Green Cemetery is one of the ‘Magnificent Seven’ cemeteries in the borough. It is the resting place of members of the royal family, including HRH Prince George, Duke of Cambridge, and scores of iconic figures in history including celebrated railway engineer Isambard Kingdom Brunel, Charles Babbage, William Makepeace Thackeray, Anthony Trollope and William Cavendish-Scott-Bentinck, 5th Duke of Portland. Architects who are buried at Kensal Green include Decimus Burton and the famous 19th century architectural families of Hardwick and Shaw. Philip Charles Hardwick, Philip Hardwick and John Shaw Junior are buried there, as well as Nobel Prize-winning playwright Harold Pinter.

Cemetery directors and the Friends of Kensal Green Cemetery group have lobbied the Heritage Lottery Fund and English Heritage for funding to help preserve historical monuments at the site. The mammoth project, which involves repairs to the grade one listed Anglican Chapel and the boundary wall, is estimate to cost more than £10m.

On 7 December 2006 at 11.00am, a tornado struck Kensal Green. Up to 150 houses were damaged, and six people were injured, one requiring hospital attention. Residential roads were closed off and residents had to seek temporary accommodation. Traffic was also diverted causing disruption. The cost of the damage is estimated to be at least £2,000,000.

All content from Kiddle encyclopedia articles (including the article images and facts) can be freely used under Attribution-ShareAlike license, unless stated otherwise. Cite this article:
Kensal Green Facts for Kids. Kiddle Encyclopedia.