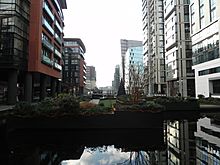 Paddington Basin is the name given to a long canal basin, and its surrounding area, in Paddington, London.

The basin commences 500 m south of the junction known as Little Venice, of the Regent's Canal and the Paddington Arm of the Grand Union Canal and runs for a similar length east-west. It was opened in 1801, with Paddington being chosen as the site of the basin because of its position on the New Road which led to the east, providing for onward transport. In its heyday, the basin was a major transshipment facility, and a hive of activity.

Since 2000, the basin has been the centre of a major redevelopment as part of the wider Paddington Waterside scheme and is surrounded by modern buildings.

The nearest London Underground stations are Edgware Road and Paddington, the latter also being served by National Rail.

All content from Kiddle encyclopedia articles (including the article images and facts) can be freely used under Attribution-ShareAlike license, unless stated otherwise. Cite this article:
Paddington Basin Facts for Kids. Kiddle Encyclopedia.