Willesden is an area of North West London, situated 5 miles (8 km) northwest of Charing Cross. It is historically a parish in the county of Middlesex that was incorporated as the Municipal Borough of Willesden in 1933, and has formed part of the London Borough of Brent in Greater London since 1965. Dollis Hill is also sometimes referred to as being part of Willesden.

With its close proximity to affluent neighbourhoods Brondesbury Park, Queen's Park and Kensal Rise, the area surrounding Willesden Green station has seen increased gentrification in the past several years, with rapidly rising property prices. The Daily Telegraph called Willesden Green one of London's "new middle class" areas. The area has a population of 44,295 as of 2011 including the Willesden Green, Dollis Hill and Dudden Hill wards. Willesden Green has one of the city's highest Irish populations, and is also strongly associated with Afro-Caribbeans and Latin Americans.

The name derives from the Anglo-Saxon Willesdune, meaning the Hill of the Spring, and a settlement bearing this name dates back to 939 AD. The Domesday Book of 1086 records it as Wellesdone. However, on 19th century maps of the town such as those from the 'Ordnance Survey First Series', the town is shown as Wilsdon. The motto of Willesden Borough Council was Laborare est orare ("to labour is to pray").

From the 14th to 16th centuries, the town was a place of pilgrimage due to the presence of two ancient statues of the Virgin Mary at the Church of St Mary. One of these statues is thought to be a Black Madonna, which was insulted by the Lollards, taken to Thomas Cromwell's house and burnt in 1538 on a large bonfire of "notable images" including those of Walsingham, Worcester and Ipswich. There was also a "holy well" which was thought to possess miraculous qualities, particularly for blindness and other eye disorders. 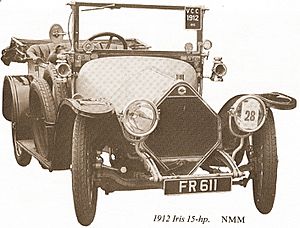 The parish of Willesden remained predominantly rural up until 1875, when its population was 18,500. It included the villages and hamlets of Brondesbury, Dollis Hill, Dudden Hill, Harlesden, Kilburn, Mapesbury, Oxgate and Stonebridge. However, this changed with the opening of the Metropolitan Railway (later the Metropolitan line) station of Willesden Green on 24 November 1879. By 1906 the population had grown to 140,000, a phenomenon of rapid growth that was to be repeated in the 1920s in neighbouring areas such as Harrow. The Metropolitan line service was withdrawn in 1940, when the station was served by the Bakerloo line, and later the Jubilee line.

World War I caused Willesden to change from a predominantly middle class suburb to a working class part of London. After the war, Willesden grew rapidly as many factories opened up with numerous flats and houses. The local council encouraged building to prevent large unemployment and decline. To the present day, Willesden has been shaped by the patterns of migration which marks it out as one of the most diverse areas in the United Kingdom. City of London Corporation records show that the first black person recorded in Brent was Sarah Eco, who was christened in St. Mary’s Church in Willesden on 15 September 1723. The 1901 United Kingdom census recorded that 42% of the population was born in London. In 1923, the specialist coach builder Freestone and Webb established their base in Willesden, producing bespoke cars on Rolls-Royce and Bentley chassis until 1956.

Willesden became a municipal borough in 1933, and it is at this time that the area became predominantly working class. A small Irish community had formed in Willesden by this time, which grew rapidly during the period of the Second World War. A small Jewish community of refugees from Europe also formed during the war, with 3.5% of the population in 1951 born in Germany, Poland, Russia or Austria. During the war, Willesden suffered large damage due to the heavy concentration of industry, such as munition factories, and railways in the area. 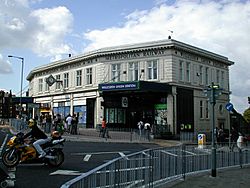 The period from 1960 saw migrants settling from the Caribbean and the Indian Subcontinent. Additionally, from 1963 it was the site of the Kuo Yuan, the first Chinese restaurant to serve Pekinese dishes in Britain. Since the 1960s, Willesden has been popular with young working holidaymakers from Canada, Australia and New Zealand, although this popularity has declined somewhat in favour of other areas since about 2003.

Willesden went into a period of decline during the 1970s and 1980s as much of the housing was inadequate due to overcrowding as industry was mixed with housing. The whole of central Willesden (bar the area by the Willesden Green station) was earmarked for redevelopment; however, this did not come to fruition. In the late 1980s, traders were given money to revamp the High Street to prevent shops closing.

The area surrounding Willesden Green station has become more middle-class and gentrified with marked property price rises in 2014 and 2015. 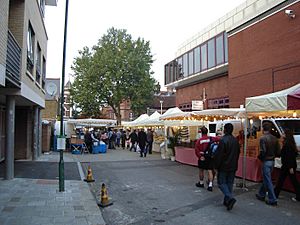 In 1965 the Municipal Borough of Willesden was abolished and it became part of the London Borough of Brent in Greater London.

The railways were instrumental in developing Willesden from a quiet village to a vibrant part of London. Willesden Green station was opened in 1879 by the Metropolitan Railway and has a grand 1920s facade. The Metropolitan connected Willesden to Central London, Harrow, Uxbridge, Rickmansworth and Aylesbury. The Metropolitan no longer stops regularly at the station (apart from when the Jubilee line is out of service). Dollis Hill station and Neasden station are also within walking distance for some Willesden residents. 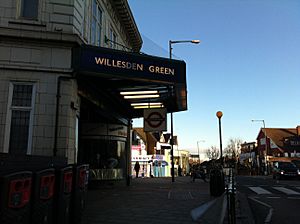 By road, Willesden is connected to many places as the A41 road/A5 road runs close by in nearby Kilburn/Cricklewood. The North Circular Road, the inner orbital road of London, is nearby running through Neasden.

A large bus garage was built in 1902 and thus many bus routes start or run through the town. These routes are shown in the table below. The Queen visited it during her Golden Jubilee celebrations (2002).

You know, I tried, I really tried to settle in this big city
And I always thought I could make it all on my very own
But there's one thing that keeps calling me
To that little, that little semi-detached
That's the folks, yeah, the folks back home
In Willesden Green

All content from Kiddle encyclopedia articles (including the article images and facts) can be freely used under Attribution-ShareAlike license, unless stated otherwise. Cite this article:
Willesden Facts for Kids. Kiddle Encyclopedia.