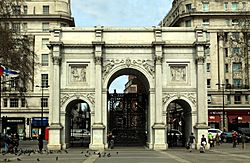 Marble Arch viewed from the south, standing near Speakers' Corner in Hyde Park

Marble Arch is a white Carrara marble monument which is on a large traffic island. It is at the junction of Oxford Street, Park Lane, and Edgware Road, almost directly opposite Speakers' Corner in Hyde Park in the City of Westminster, London.

Historically, only members of the royal family and the King's Troop, Royal Horse Artillery, have been allowed to pass through the arch in ceremonial procession.

The name "Marble Arch" today usually refers to the area in West London where the arch is, at the southern end of Edgware Road. There is also a Marble Arch underground station nearby. 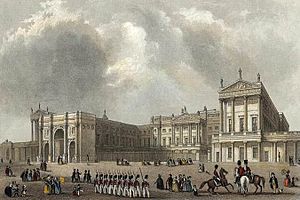 Marble Arch as originally erected, as a gateway to the newly rebuilt Buckingham Palace.

All content from Kiddle encyclopedia articles (including the article images and facts) can be freely used under Attribution-ShareAlike license, unless stated otherwise. Cite this article:
Marble Arch Facts for Kids. Kiddle Encyclopedia.