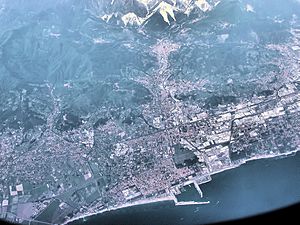 The area around Carrara, seen from above

Carrara is a city in the province of Massa-Carrara (Tuscany, Italy), famous for white or blue-gray marble, and for being a city "symbol" of international anarchism.

Carrara and Massa made up the Duchy of Massa and Carrara from the 15th to the 19th century. In 1929, the cities of Carrara, Massa and Montignoso were mixed in a single big city, called Apuania. In 1945 "Apuania", was separated, and the cities, were returned free. 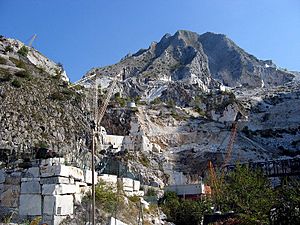 Carrara marble has been used since the time of Ancient Rome for buildings, like the Pantheon and Trajan's Column in Rome. Many sculptures of the Renaissance, such as Michelangelo's David, were made from Carrara marble.

The city has academies of sculpture and fine arts and a museum of statuaries and antiquities. The local marble is exported around the world.

All content from Kiddle encyclopedia articles (including the article images and facts) can be freely used under Attribution-ShareAlike license, unless stated otherwise. Cite this article:
Carrara Facts for Kids. Kiddle Encyclopedia.