Kragujevac is the fourth largest city in Serbia and the administrative centre of the Šumadija District. It is the historical centre of the once densely-forested region of Šumadija in central Serbia, and is situated on the banks of the Lepenica River. According to the 2011 census[update], the city proper has a population of 150,835, while its administrative area comprises a total of 179,417 inhabitants.

Modern Kragujevac is known for its large munitions (Zastava Arms) and automobile (FCA Srbija) industries, as well as its status as an education centre housing the University of Kragujevac, one of the region's largest higher education institutions.

The name Kragujevac comes from the Serbian word 'kraguj', which describes a species of hawk. In the Middle Ages, this hawk was common in the woods of the area, and was used for hunting. Therefore, the city's name means 'hawks' roost', an origin well represented on the city's flag. 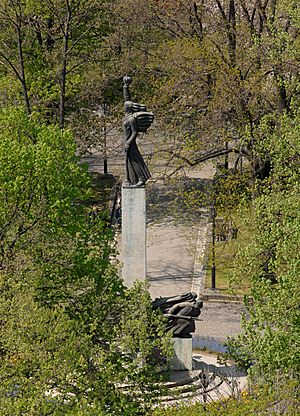 Monument to the people from Šumadija in the wars

Over 200 archaeological sites in Šumadija confirm that the region's first human settlement took place around 40,000 years ago during the Paleolithic era. The Jerina cave, located near the village of Gradac, is dated to have been inhabited from around 37,000 BP to 27,000 BP. Dugouts dated to 5,000 BC have been found in the city's vicinity.

At the time of Roman conquest in 9 AD, the territory of the present-day city was largely inhabited by Illyrians and Celts.

By the late 6th and early 7th centuries, large-scale Slavic raids and settlement began, along with invasions from Hunnic and Germanic tribes. Later, the area would become part of the First Bulgarian Empire.

With the weakening of both the Bulgarian and Eastern Roman empires, Stefan Nemanja, Grand Prince of the medieval Serbian state, captured the territory between 1198 and 1199.

Historically, Kragujevac was the first capital of free Serbia (from 1818 to 1839), and the first constitution ever proclaimed in Balkans was in this city on February 15, 1835 (state holiday). 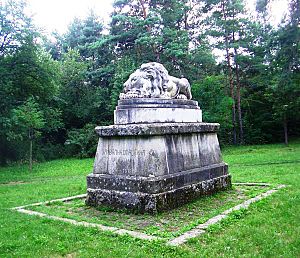 In 1841, capital city of Serbia was changed from Kragujevac to Belgrade, during World War I, Kragujevac again became the capital of Serbia from 1914–1915.

Nowadays, Kragujevac is a big centre of the automobile industry and weapons. Although Kragujevac lost its capital status to Belgrade, its importance only increased during the 19th century as it grew into a city marked by its industry.

The beginnings of the town's industry have been recognized by the Serbian government as vital to Serbia's cultural heritage and, as of 2017, consists of 151 individual objects, of which 31 are protected as unique heritage.

The city today remains an industrial heart of Serbia, and has grown with the influx of students and refugees from the Yugoslav wars.

The Kragujevac Cannon Foundry in its working days, originally built in 1856

Kragujevac has been an important industrial and trading centre of Serbia for more than two centuries, known for its automotive and firearms industries. The former state-owned Zastava Automobiles company was purchased by Fiat in 2008, and the new company, FCA Srbija, was established.

Weapons manufacturing in Kragujevac began with foundation of the VTZ in 1853 and has since grown to become Serbia's primary supplier of firearms through the Zastava Arms corporation. Today, Zastava Arms exports more than 95% of its products to over forty countries in the world. By the decisions of the Ministry of Defence of Serbia, Zastava Arms became a part of the Defense Industry of Serbia in 2003.

The Kragujevac Fair was established in 2005. It comprises 1,600 square metres (17,222 sq ft) of area dedicated to trade and exhibitions.

As of September 2017, Kragujevac is one of the 14 free economic zones established in Serbia. 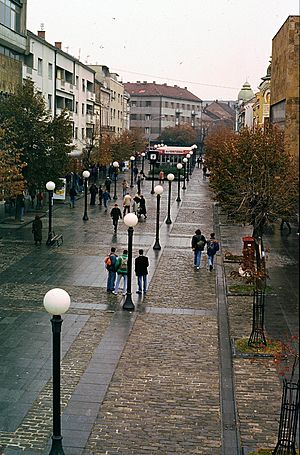 The architecture of Kragujevac displays many different styles from the early years of its beginnings. Today newer architecture dominates the city's panorama. Brutalism as well as post-war concrete apartment blocks built during the Socialist Federal Republic of Yugoslavia period, is present throughout the city. Some important buildings in Kragujevac include: 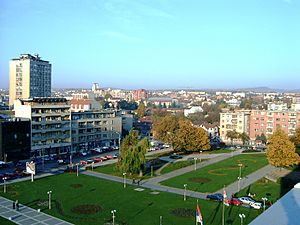 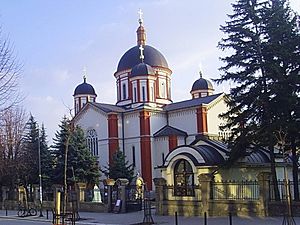 The Upper (Great) Park is the largest park in Kragujevac. It was established in 1898. It is covered with more than 10 hectares (25 acres) of greenery, and a dense cover of century-old trees, renovated walkways and benches are the right place for rest, walk and relaxation.

In and around the park there are sports facilities for basketball, football, volleyball, tennis, and indoor and outdoor swimming pools.

Lower (Small) Park is located in the city centre, within the Milos Wreath complex. At its centre there is a monument to the Fallen People of Šumadija. The Ilina Voda park, a legacy of Svetozar Andrejević, was established in 1900. It covers an area of 7 hectares (17 acres).

There is a fountain with a small waterfall, five mini lakes connected by a small stream, and a small zoo with about 100 animals and a garden with various types of trees characteristic of Šumadija. The main feature in the park is the largest sculpture of Easter eggs (3 metres (10 ft) high) in Europe and the second in the world; made from recycled metal, set in 2004.

All content from Kiddle encyclopedia articles (including the article images and facts) can be freely used under Attribution-ShareAlike license, unless stated otherwise. Cite this article:
Kragujevac Facts for Kids. Kiddle Encyclopedia.