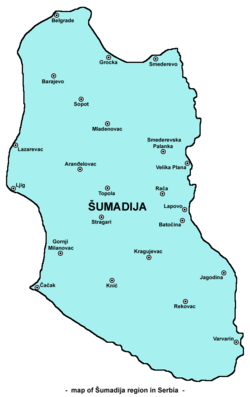 Map of Šumadija region, including its entire geographical area

Šumadija (Serbian Cyrillic: Шумадија) is a geographical region in Serbia. The area was heavily forested, hence the name (Šuma - forest). The city of Kragujevac is the center of the region, and the administrative center of the Šumadija District in Central Serbia.

Šumadija is located between rivers Sava and Danube in the north, river Velika Morava in the east, river Zapadna Morava in the south, and Kolubara, Ljig and Dičina in the west. According to some interpretations (for example, physiologists such as Jovan Cvijić and ethnologist such as Erdeljanović.), the northern border of Šumadija lay between Avala and Kosmaj mountain. According to that view, the capital of Serbia, Belgrade does not belong to this region.

During the 18th century, the forests of Šumadija were the refuge for the Hajduks that fought against Ottoman occupation. The first Serbian uprising in 1804 was led by national hero Karađorđe. The second Serbian uprising in 1815 was led by Miloš Obrenović who successfully repelled the Turkish forces and, by 1830, Serbia had gained its full autonomy. Because of Miloš's efforts and negotiations Serbia was finally an independent state, after centuries under Ottoman reign.

Between 1922 and 1929, one of the administrative units of the Kingdom of Yugoslavia was named Šumadijska Oblast. It roughly included territory of present-day Šumadija District with its administrative seat in Kragujevac, which is the seat of the modern district as well. 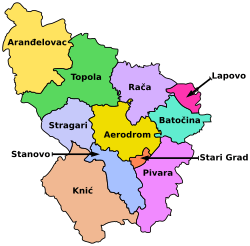 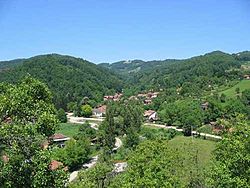 Some of the large cities and towns in Šumadija are:

Other smaller towns include:

All content from Kiddle encyclopedia articles (including the article images and facts) can be freely used under Attribution-ShareAlike license, unless stated otherwise. Cite this article:
Šumadija Facts for Kids. Kiddle Encyclopedia.