Springfield is a city in the U.S. state of Ohio and the county seat of Clark County. The municipality is located in southwestern Ohio and is situated on the Mad River, Buck Creek, and Beaver Creek, approximately 45 miles (72 km) west of Columbus and 25 miles (40 km) northeast of Dayton. Springfield is home to Wittenberg University, a liberal arts college.

As of the 2020 census, the city had a total population of 58,662, The Springfield Metropolitan Statistical Area had a population of 136,001 residents. The Little Miami Scenic Trail, a paved rail-trail that is nearly 80 miles long, extends from the Buck Creek Scenic Trail head in Springfield south to Newtown, Ohio (near Cincinnati). It has become popular with hikers and cyclists.

In 1983, Newsweek magazine featured Springfield in its 50th-anniversary issue, entitled, "The American Dream." It chronicled the effects of changes of the previous 50 years on five local families. In 2004, Springfield was chosen as an "All-America City." In the 2010s, Springfield ranked low among cities in the state and nation for indicators such as health, happiness, and well-being.

The villages of Peckuwe and Piqua were located near today's Springfield, Ohio, at 39° 54.5′ N, 83° 54.68′ W and 39° 54.501′ N, 83° 54.682′ W respectively, and were home to the Peckuwe and Kispoko Divisions of the Shawnee Tribe until the Battle of Piqua, August 8, 1780. The Piqua Sept of Ohio Shawnee Tribe have placed a traditional cedar pole in commemoration, located "on the southern edge of the George Rogers Clark Historical Park, in the lowlands in front of the park's 'Hertzler House.'"

Springfield was founded by James Demint, a former teamster from Kentucky, in 1801. When Clark County was created from parts of Champaign, Madison and Greene counties, Springfield, named for Springfield, Massachusetts – which, at the time, was important for hosting the U.S. Federal Springfield Armory; enduring the Attack on Springfield during King Philip's War in 1675,; and Shays' Rebellion in 1787.

Springfield traces its early growth to the National Road, which ended in Springfield for approximately 10 years as politicians wrangled over the path it would continue. Dayton and Eaton wanted the road to veer south after Springfield, but President Andrew Jackson made the final decision to have the road continue straight west to Richmond, Indiana.

In 1902 A.B. Graham, then the superintendent of schools for Springfield Township in Clark County, established a "Boys' and Girls' Agricultural Club." Approximately 85 children from 10 to 15 years of age attended the first meeting on January 15, 1902 in Springfield, Ohio, in the basement of the Clark County Courthouse. This was the start of what would be called the "4-H Club" within a few years, quickly growing to a nationwide organization. (4-H stands for "Head, Heart, Hands, and Health"). The first "projects" included food preservation, gardening and elementary agriculture. Today, the Courthouse still bears a large 4H symbol under the flag pole at the front of the building to commemorate its part in founding the organization. The Clark County Fair is the second largest fair in the state (only the Ohio State Fair is larger) in large part to 4H still remaining very popular in the area.

On March 7, 1904, over a thousand residents formed a lynch mob, stormed the jail and removed prisoner Richard Dixon, a black man accused of murdering police officer Charles B. Collis. Richard Dixon was shot to death and then hung from a pole on the corner of Fountain and Main Street, where the mob continued to shoot his lifeless body. The mob then proceeded to burn much of the black area of town. In February 1906, another mob formed and again burned the black section of town known as "the levee". Sixty years later, Springfield was the first city in Ohio to have a black mayor, Robert Henry. 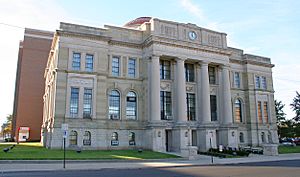 From 1916 to 1926, 10 automobile companies operated in Springfield. Among them: The Bramwell, Brenning, Foos, Frayer-Miller, Kelly Steam, Russell-Springfield and Westcott. The Westcott, known as the car built to last, was a six-cylinder four-door sedan manufactured by Burton J. Westcott of the Westcott Motor Car Company. Burton and Orpha Westcott however, are better known for having contracted the world-renowned architect Frank Lloyd Wright to design their home in 1908 at 1340 East High Street. The Westcott House, a sprawling two-story stucco and concrete house has all the features of Wright's prairie style including horizontal lines, low-pitched roof, and broad eaves. It is the only Frank Lloyd Wright prairie style house in the state of Ohio. The property was purchased in 2000 by the Frank Lloyd Wright Building Conservancy (Chicago, IL), and as part of a prearranged plan, the house was then sold to a newly formed local Westcott House Foundation. The Westcott House Foundation managed the extensive 5-year, $5.3 million restoration, the house was fully restored to its original glory in October 2005, when it officially opened to the public for guided tours. 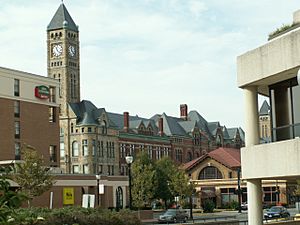 International Harvester (now Navistar), manufacturer of farm machinery and later trucks, became the leading local industry after Springfield native William Whiteley invented the self-raking reaper and mower, in 1856. It held that position, along with Crowell-Collier Publishing, throughout most of the next century.

In 2009, during a scene of the movie X-Men Origins: Wolverine, "Springfield, Ohio" is listed in the scene caption as the location of a carnival where Victor Creed/Sabretooth finds Chris Bradley/Bolt working as a game booth attendant.

Springfield has a notably weakened economy due to many factors, but a key cause for degradation of the economy in Springfield has been the decline in manufacturing jobs. Between 1999 and 2014, Springfield saw the median income decreased by 27 percent, compared to just 8 percent across the country. In the 1990s, Springfield lost 22,000 blue collar jobs, which was the backbone of the city economy. Today, Springfield largely relies on healthcare, manufacturing, transportation, leisure, education, financial institutions, and retail for employment.

Also located in Springfield is the Global Impact STEM Academy, an early-college middle school and high school certified in Science, Technology, Engineering, and Mathematics curriculum. It was founded in 2013. 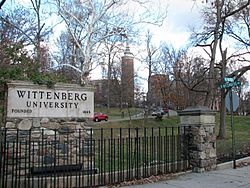 Wittenberg University is a Lutheran university that was founded in Springfield in 1845. It is a four-year private liberal arts university. It has approximately 1800 students and a faculty of approximately 140. It is situated on a campus of 114 acres. It is one of the most highly-rated liberal arts universities in the nation, offering more than seventy majors. Wittenberg has more than 150 campus organizations, which include ten national fraternities and sororities. The WUSO radio station is operated on the campus.

The following are notable people born and/or raised in Springfield:

All content from Kiddle encyclopedia articles (including the article images and facts) can be freely used under Attribution-ShareAlike license, unless stated otherwise. Cite this article:
Springfield, Ohio Facts for Kids. Kiddle Encyclopedia.