Richmond is a city in east central Indiana, United States of America, bordering the state of Ohio. It is the county seat of Wayne County, and is part of the Dayton, Ohio metropolitan area. In the 2010 census, the city had a population of 36,812. Situated largely within Wayne Township, its area includes a non-contiguous portion in nearby Boston Township, where Richmond Municipal Airport is currently located.

Richmond is sometimes called the "cradle of recorded jazz" because the earliest jazz recordings and records were made at the studio of Gennett Records, a division of the Starr Piano Company. Gennett Records was the first to record such artists as Louis Armstrong, Bix Beiderbecke, Jelly Roll Morton, Hoagy Carmichael, Lawrence Welk, and Gene Autry.

The city has twice received the All-America City Award, most recently in 2009.

In 1806 the first European Americans in the area, Quaker families from North Carolina, settled along the East Fork of the Whitewater River. This was part of a general westward migration in the early decades after the American Revolution. John Smith and David Hoover were among the earliest settlers. Richmond is still home to several Quaker institutions, including Friends United Meeting, Earlham College and the Earlham School of Religion.

The settlement was incorporated as a town on Sept. 1, 1818. At that time, it had 24 adult settlers. The first post office in Richmond was established in 1818.

Early cinema and television pioneer Charles Francis Jenkins grew-up on a farm north of Richmond, where he began inventing useful gadgets. As the Richmond Telegram reported, on June 6, 1894, Jenkins gathered his family, friends and newsmen at Jenkins' cousin's jewelry store in downtown Richmond and projected a filmed motion picture for the first time in front of an audience. The motion picture was of a vaudeville entertainer performing a butterfly dance, which Jenkins had filmed himself. Jenkins filed for a patent for the Phantoscope projector in November 1894 and it was issued in March of '95. A modified version of the Phantoscope was later sold to Thomas Edison who named it Edison's Vitascope and began projecting motion pictures in New York City vaudeville theaters, raising the curtain on American cinema.

Richmond is believed to have been the smallest community in the United States to have supported a professional opera company and symphony orchestra. The Whitewater Opera has since closed but the Richmond Symphony Orchestra has continued. In 1899 Will Earhart formed the first complete high school orchestra in the nation. A later high school orchestra director, Joseph E. Maddy, went on to found what is now known as the Interlochen Center for the Arts in Michigan.

Also notable was the fact that Hoagy Carmichael recorded "Stardust" for the first time in Richmond at the Gennett recording studio. Famed trumpeter and singer Louis Armstrong was first recorded at Gennett as a member of King Oliver and his Creole Jazz Band.

A group of artists in the area in the late 19th and early 20th centuries came to be known as the Richmond Group. They included John Elwood Bundy, Charles Conner, George Herbert Baker, Maude Kaufman Eggemeyer and John Albert Seaford, among others. The Richmond Art Museum has a collection of regional and American art. Many consider the most significant painting in the collection to be a self-portrait of Indiana-born William Merritt Chase.

The city was connected to the National Road, the first road built by the federal government and a major route west for pioneers of the 19th century. It became part of the system of National Auto Trails. The highway is now known as U.S. Route 40. One of the extant Madonna of the Trail monuments was dedicated at Richmond on October 28, 1928 The monument sits in a corner of Glen Miller Park adjacent to US 40.

Richmond's cultural resources include two of Indiana's three Egyptian mummies. One is held by the Wayne County Historical Museum and the second by Earlham College's Joseph Moore Museum, leading to the local nickname of "Mummy capital of Indiana".

The arts were supported by a strong economy increasingly based on manufacturing. Richmond was once known as "the lawn mower capital" because it was a center for manufacturing of lawn mowers from the late 19th century through the mid-20th century. Manufacturers included Davis, Motomower, Dille-McGuire and F&N. The farm machinery builder Gaar-Scott was based in Richmond. The Davis Aircraft Co., builder of a light parasol wing monoplane, operated in Richmond beginning in 1929.

After starting out in nearby Union City, Wayne Agricultural Works moved to Richmond. Wayne was a manufacturer of horse-drawn vehicles, including "kid hacks", a precursor of the motorized school bus. From the early 1930s through the 1940s, several automobile designers and manufacturers were located in Richmond. Among the automobiles locally manufactured were the Richmond, built by the Wayne Works; the "Rodefeld"; the Davis; the Pilot; the Westcott and the Crosley.

In the 1950s, Wayne Works changed its name to Wayne Corporation, by then a well-known bus and school-bus manufacturer. In 1967 it relocated to a site adjacent to Interstate 70. The company was a leader in school-bus safety innovations, but it closed in 1992 during a period of school-bus manufacturing industry consolidations.

Richmond was known as the "Rose City" because of the many varieties once grown there by Hill's Roses. The company had several sprawling complexes of greenhouses, with a total of about 34 acres (140,000 m2) under glass. The annual Richmond Rose Festival honored the rose industry and was a popular summer attraction.

On April 6, 1968, a natural gas explosion and fire destroyed or damaged several downtown blocks and killed 41 people; more than 150 were injured. The book Death in a Sunny Street is about the event.

In the rebuilding effort, the city closed the main street through downtown to traffic and built the Downtown Promenade in 1972 (expanded in 1978). When studies showed that car traffic helped businesses, the city had the five-block pedestrian mall broken up. It reopened the street to traffic in 1997 as part of an urban revitalization effort.

On March 17, 1999, the 155-year-old family run business, Swayne, Robinson and Company was destroyed in a fire. The site is now the location of the Wayne County Jail. 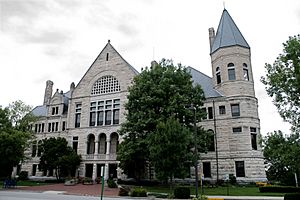 Richmond is noted for its rich stock of historic architecture. In 2003, a book entitled Richmond Indiana: Its Physical Development and Aesthetic Heritage to 1920 by Cornell University architectural historians, Michael and Mary Raddant Tomlan, was published by the Indiana Historical Society. Particularly notable buildings are the 1902 Pennsylvania Railroad Station designed by Daniel H. Burnham of Chicago and the 1893 Wayne County Court House designed by James W. McLaughlin of Cincinnati. Local architects of note include John A. Hasecoster, William S. Kaufman and Stephen O. Yates.

Richmond Municipal Airport is a public-use airport located five nautical miles (6 mi, 9 km) southeast of the central business district of Richmond. It is owned by the Richmond Board of Aviation Commissioners. It is also an exclave of Richmond.

Richmond is served by Interstate 70 at exits 149, 151, 153, and 156. Public transit service is provided by city-owned Roseview Transit, operating daily except Sundays and major holidays. 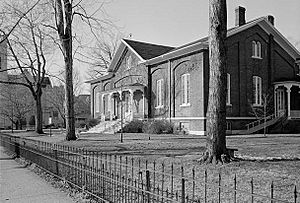 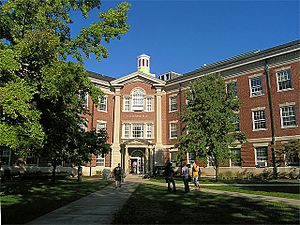 The town has a lending library, the Morrisson Reeves Library.

All content from Kiddle encyclopedia articles (including the article images and facts) can be freely used under Attribution-ShareAlike license, unless stated otherwise. Cite this article:
Richmond, Indiana Facts for Kids. Kiddle Encyclopedia.