Wayne County is a county located in east central Indiana, United States, on the border with Ohio. As of the 2010 census, the population was 68,917. The county seat is Richmond.

Wayne County was formed in 1811. It was named for Gen. "Mad" Anthony Wayne, who was an officer during the Revolutionary War. Wayne is mainly remembered for his service in the 1790s in the Northwest Indian War, which included many actions in Indiana and Ohio.

The first county seat was Salisbury, Indiana, a town which no longer exists and later moved to Centerville, Indiana where it remained until a move to Richmond.

In the 1920s, Indiana had the strongest Ku Klux Klan organization in the country under Grand Dragons D. C. Stephenson and Walter F. Bossert, with control over the state legislature and an ally in Governor Ed Jackson. At its height, national membership during the second Klan movement reached 1.5 million, with 300,000 from Indiana. Records show that Wayne County was home to Whitewater Klan No. 60. Robert Lyons, of Richmond, was national chief of staff for the Klan. 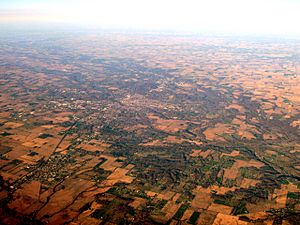 Richmond is the county seat.

All content from Kiddle encyclopedia articles (including the article images and facts) can be freely used under Attribution-ShareAlike license, unless stated otherwise. Cite this article:
Wayne County, Indiana Facts for Kids. Kiddle Encyclopedia.