Henry County is a county located in east central Indiana, United States. As of 2010, the population was 49,462. The county seat and largest and only city is New Castle. Henry County is the main setting of the novel Raintree County by Ross Lockridge, Jr.

Henry County was formed in 1822. It was named for Patriot Patrick Henry, governor of Virginia. 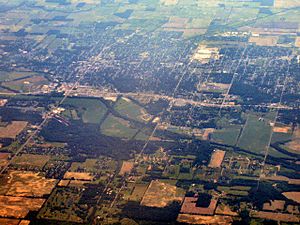 All content from Kiddle encyclopedia articles (including the article images and facts) can be freely used under Attribution-ShareAlike license, unless stated otherwise. Cite this article:
Henry County, Indiana Facts for Kids. Kiddle Encyclopedia.