Randolph County is a county located in the U.S. state of Indiana. As of 2010, the population was 26,171. The county seat is Winchester. 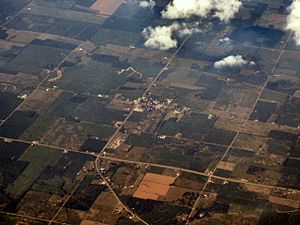 Modoc from the air, looking northeast.

The Indiana General Assembly authorized the formation of Randolph County from Wayne County in January 1818 to take effect in August 1818. The county was almost certainly named for Randolph County, North Carolina, where the area's first settlers came from. That county was named for Peyton Randolph, the first President of the Continental Congress under the Articles of Confederation.

Between 1820 and 1824, the county's territory extended to the Michigan boundary; consequently, the plat for the town of Fort Wayne (now a city) is recorded in Randolph County's Recorder's Office. Randolph County's population grew rapidly in the early years of the nineteenth century. It was also known as a progressive community. As a home to a large number of members of the Society of Friends (Quakers), education and abolitionism became important movements. The county was home to three famous settlements of free African-Americans. The most famous, the Greenville Settlement, in Greensfork Township, was the site of Union Literary Institute, one of the first racially integrated schools in the United States.

Randolph County has been a Republican-stronghold since the 1850s. As such, the county produced two Governors, one Congressman, one U. S. Senator, three Indiana Secretaries of State, and one State Superintendent of Public Instruction between 1858 and 1931. The county's population growth slowed after 1880.

Randolph County answered the problem of rural decline in the early twentieth century by embracing much of the "Country Life Movement." The major act was the movement to consolidate the county's rural schools. This was done under the leadership of Lee L. Driver, a county native who became the nation's leading expert on rural school consolidation. Randolph County became the exemplar of the movement and was the subject of many publications and visits from officials from as far away as Canada and China.

In recent years, residents in Winchester, Union City, and Farmland have sought to revitalize the county through a renewed focus on historic preservation, tourism, and the arts.

Randolph County is the point of origin for the White River and Whitewater River. 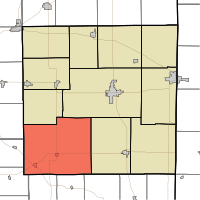 Map of Randolph County, Indiana With Municipal and Township Labels

Farmers market during the summer on the Winchester Square

Labor Day Marathon Softball Tournament (Winchester city Park and draws teams from all over the United States to play softball and celebrate the last holiday of Summer. Winchester's population nearly doubles for this weekend)

Madi Gras held annually each fall in Winchester during October

Heritage Days held annually in the fall in Union City.

All content from Kiddle encyclopedia articles (including the article images and facts) can be freely used under Attribution-ShareAlike license, unless stated otherwise. Cite this article:
Randolph County, Indiana Facts for Kids. Kiddle Encyclopedia.