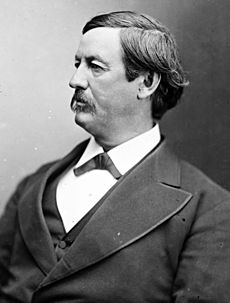 Born in New Paris, Ohio, Browne moved to Indiana in January 1844. He attended the common schools. He moved to Winchester, Indiana, in 1848. He studied law and was admitted to the bar in 1849 and commenced practice in Winchester. Browne was elected prosecuting attorney for the thirteenth judicial circuit in 1855 and was reelected in 1857 and 1859. He was named Secretary of the Indiana State Senate in 1861, and he served as a member of the state senate in 1863.

Browne assisted in organizing the Seventh Regiment, Indiana Volunteer Cavalry of the Union Army, and went to the field with that regiment as captain of Company B on August 28, 1863. He was commissioned lieutenant colonel on October 1, 1863. He was promoted to colonel on October 10, 1865, and subsequently brevetted a brigadier general to date from March 13, 1865. After the war, he mustered out of the army on February 18, 1866.

He was appointed United States attorney for the district of Indiana in April 1869 and served until his resignation August 1, 1872. In 1872 he ran against Benjamin Harrison for the Republican nomination for governor of Indiana. He won the nomination but was defeated in the general election by the Democratic candidate, Thomas A. Hendricks. He served as a delegate to the Republican National Convention in 1876.

Browne was elected as a Republican to the House of Representatives, where he served from March 4, 1877, to March 3, 1891. He served as chairman of the Committee on Invalid Pensions (Forty-seventh Congress), Committee on Revision of the Laws (Fifty-first Congress). He was not a candidate for renomination in 1890.

Browne died in Winchester, Indiana, on July 17, 1891. He was interred in Fountain Park Cemetery.

All content from Kiddle encyclopedia articles (including the article images and facts) can be freely used under Attribution-ShareAlike license, unless stated otherwise. Cite this article:
Thomas M. Browne Facts for Kids. Kiddle Encyclopedia.