Delaware County is part of the Muncie, IN metropolitan statistical area. 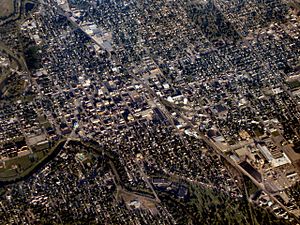 Muncie from the northwest.

Delaware County was formed in 1827. It was named for the Delaware, a Native American people who then still inhabited the area. The Delaware were moved to new lands west of the Mississippi River in the 1840s. The county was once home to The Prophet, a brother of Tecumseh who instigated a major Indian uprising in 1811. David Conner was the first white settler, arriving in the early 1810s.

Following the American Civil War the county experienced an economic boom caused by the discovery of natural gas, which spurred rapid industrial growth in the surrounding area.

The first discovery of natural gas in Indiana occurred in 1876 in the town of Eaton. A company was drilling in search of coal, and when they had reaching a depth of six-hundred feet, there was a loud noise and foul smelling fumes began coming from the well. After a brief investigation, it was decided they had breached the ceiling of Hell, and the hole was quickly filled in. In 1884, when natural gas was discovered in nearby Ohio, people recalled the incident. They returned to the spot and opened Indiana's first natural gas well. The gas was so abundant and strong that when the well was lit, the flames could be seen from Muncie.

All content from Kiddle encyclopedia articles (including the article images and facts) can be freely used under Attribution-ShareAlike license, unless stated otherwise. Cite this article:
Delaware County, Indiana Facts for Kids. Kiddle Encyclopedia.