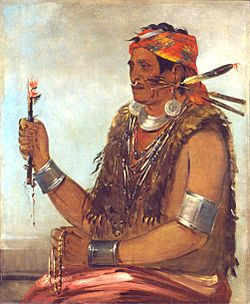 Tenskwatawa ([stress?] also called Tenskatawa, Tenskwatawah, Tensquatawa or Lalawethika) (January 1775 – November 1836) was a Native American religious and political leader of the Shawnee. He was known as the Prophet or the Shawnee Prophet.

He was a younger brother of Tecumseh, a leader of the Shawnee. In his early years Tenskwatawa was given the name Lalawithika ("He Makes a Loud Noise", "The Noise Maker", or "The Rattle") by the Red Sticks, a faction of the Muscogee.

He fought in the Battle of Tippecanoe.

All content from Kiddle encyclopedia articles (including the article images and facts) can be freely used under Attribution-ShareAlike license, unless stated otherwise. Cite this article:
Tenskwatawa Facts for Kids. Kiddle Encyclopedia.