Corydon is a town in Harrison Township, Harrison County, Indiana. Located north of the Ohio River in the extreme southern part of the U.S. state of Indiana, it is the seat of government for Harrison County. Corydon was founded in 1808 and served as the capital of the Indiana Territory from 1813 to 1816. It was the site of Indiana's first constitutional convention, which was held June 10–29, 1816. Forty-three convened to consider statehood for Indiana and drafted its first state constitution. Under Article XI, Section 11, of the Indiana 1816 constitution, Corydon was designated as the capital of the state until 1825, when the seat of state government was moved to Indianapolis. During the American Civil War, Corydon was the site of the Battle of Corydon, the only official pitched battle waged in Indiana. More recently, the town's numerous historic sites have helped it become a tourist destination. A portion of its downtown area is listed in the National Register of Historic Places as the Corydon Historic District. As of the 2010 census, Corydon had a population of 3,122. 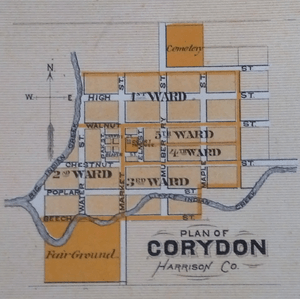 Map of Corydon from 1876 atlas

During the American Revolution George Rogers Clark captured the surrounding area of what became the town of Corydon from the British, bringing it under the control of the fledgling United States government.

In the early 1800s Edward Smith brought his family to settle at the edge of a fertile valley near a large spring, the site of the present-day Harrison County fairgrounds.

The town gets its name from "The Pastoral Elegy," a hymn that celebrates the death of a shepherd named Corydon. Tradition says that Harrison asked Edward Smith's daughter, Jenny, to name the town and he chose the name from Harrison's favorite hymn, "The Pastoral Elegy." Harrison sold the town site to Harvey Heth in 1807.

Corydon's official founding date of 1808 commemorates the year when Heth, a U.S. government surveyor and landowner, platted the town. Heth donated the town square for public use and sold individual lots to settlers and the territorial government. When Harrison County was established in 1808, Corydon became its county seat of government. In 1809 Corydon was connected by road to Doup's Ferry, 15 miles (24 km) to the south at Mauck's Port, providing access to the Ohio River for trade.

During the War of 1812 Corydon sent a mounted militia company nicknamed the Yellow Jackets to support the territorial army. The company fought in the Battle of Tippecanoe, where it suffered more casualties than any other unit engaged on there. 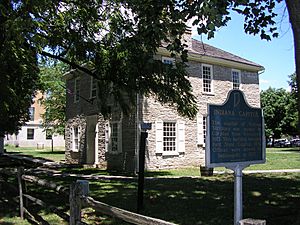 Corydon became the second capital of the Indiana Territory on May 1, 1813, when it was relocated from Vincennes in Knox County. Opponents of William Henry Harrison, the former territorial governor, wanted to move the capital away from his political stronghold in Knox County. Supporters of the move felt that relocation of the territorial capital to the east would provide a more centralized location for its citizens, especially after its western portion was reorganized to form the Illinois Territory in 1809.

Corydon competed with Charlestown, Clarksville, Lawrenceburg, Madison, and Jeffersonville to become the new territorial capital. Dennis Pennington, a Harrison County representative and the speaker of the territorial legislature's lower house, helped secure the town's selection during the 1813 session of the Indiana Territory's general assembly. Pennington pointed out that Corydon would be an ideal location. The Harrison County court had approved a design for a new county courthouse on Corydon's public square in 1811 and it could be used as an assembly building for the territorial legislature. Pennington supervised construction of limestone courthouse, which was nearly completed when Indiana's first state legislature convened at Corydon in 1816.

On April 19, 1816, President James Madison signed an Enabling Act that provided for the election of delegates to a convention at Corydon to consider statehood for Indiana. Forty-three delegates, including five men from Harrison County, convened June 10–29, 1816, to draft Indiana's first state constitution. The preamble of the constitution acknowledges the site of the historic gathering: "We the Representatives of the people of the Territory of Indiana, in Convention met, at Corydon, on Monday the tenth day of June in the year of our Lord eighteen hundred and sixteen,..."

The delegates met in an unfinished log cabin near the Harrison County courthouse, which had not yet been completed, but due to cramped conditions and the summer heat, the men often sought refuge outside, under a giant elm tree. (The tree was later named the Constitution Elm. A portion of its trunk has been preserved, surrounded by a sandstone memorial.) The delegates completed their work in nineteen days, adjourning on June 29, 1816, when the newly signed state constitution went into effect. As outlined in Article XI, Section 11, of the constitution of 1816: "Corydon, in Harrison County shall be the seat of Government of the state of Indiana, until the year eighteen hundred and twenty-five, and until removed by law."

On November 4, 1816, the Indiana General Assembly met for the first time at Corydon under the new constitution and state government. President James Madison signed the congressional resolution admitting Indiana as the nineteenth state in the Union on December 11, 1816, and Corydon began a new era as the first state capital of Indiana.

The Harrison County courthouse, now known as the Old Capitol, served as Indiana's first state capitol building. It housed state government offices from 1816 until 1825. Several other historic structures in Corydon date from the early statehood era, including the Governor's Mansion and the Old Treasury Building (Indiana's first state office building), which were built in 1817, and the Colonel Thomas Lloyd Posey home, among others. Cordon's Grand Masonic Lodge, the first in the state, was built in 1819.

During the eleven years that Corydon served as a territorial and state capital, it was a center of politics. Notable residents during this time included Davis Floyd, a prominent local politician; two governors of Indiana, Jonathan Jennings and Ratliff Boon (the state's first and second governors, respectively); Dennis Pennington, the first Speaker of the Indiana Senate; and William Hendricks, Indiana's first U. S. Representative, its third governor, and a U.S. Senator.

The state constitution's provision making Corydon the seat of state government was not a popular one, especially among the citizens of rival towns. Others expressed concern that the town's geographical location in the extreme southern part of Indiana would become inconvenient as the state's population center shifted northward; however, Dennis Pennington and other Harrison County representatives to the Indiana General Assembly successfully resisted attempts to move the seat of government from Corydon until 1825. Governor Hendricks signed a legislative bill in 1824 to move the state capital to Indianapolis, effective January 10, 1825.

After the seat of state government moved to Indianapolis in 1825, Corydon continued its role as the seat of county government and a market town for the surrounding agricultural area. On September 11–14, 1860, the first annual county fair was held on Corydon's 36-acre (15 ha) fairgrounds. It has been an annual event since 1860, making it the longest, consecutive-running annual county fair in the state. The fairgrounds, established in the southwest corner of town, is bordered on the south and west by a large ridge that served as a natural grandstand until the first grandstand was built, circa 1910. 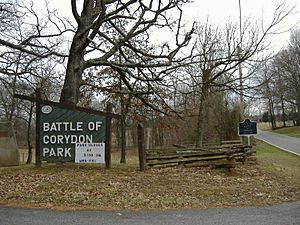 During the Civil War, Corydon was the site of the only "official pitched battle" fought in Indiana. On July 9, 1863, Confederate brigadier general John Hunt Morgan's cavalry of more than 2,000 men crossed the Ohio River into Indiana to begin what is known as "Morgan's Raid". The Confederate troops opposed about 450 members of a hastily assembled home guard at the Battle of Corydon outside of town, but the Union forces were quickly defeated and the town surrendered.

Corydon was sacked in retaliation for Union looting in Kentucky, the town's treasury of $690 was seized, and the inmates of the local jail were released. General Morgan demanded $600 to $700 in ransom from each mill and shop owner to keep their buildings from being burned. Tradition says one Corydon miller overpaid by $200; Morgan promptly returned it to him. 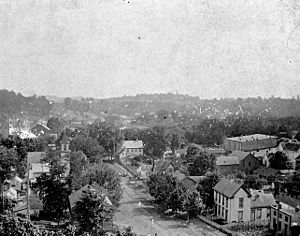 Beginning in 1882 the Louisville, New Albany and Corydon Railroad, an 8-mile (13 km) spur of the Southern Railway, connected Corydon to other towns in the region. Southern Railroad's main line ran across northern Harrison County at Crandall, and remained open to passenger traffic until 1996. As of 2008, the line was owned by Lucas Oil. 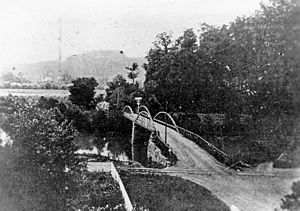 In 1917 the state of Indiana purchased the historic Old Capital with the goal of restoring it. The Federal-style building opened as a state memorial in 1929–30; it is a part of the Corydon Capitol State Historic Site. The Harrison County government also used the former statehouse until a new, three-story county courthouse was completed in 1929.

In 1960 a fire destroyed much of the Harrison County Fairgrounds, including its grandstand. A replacement grandstand was acquired from the minor league baseball team at Parkway Field in Louisville, Kentucky, is still in use.

In 1973 a portion of Corydon's downtown area was listed on the National Register of Historic Places as the Corydon Historic District. Initially, the district included major sites dating from the period when Corydon was a territorial and state capital: the Old Capitol/Harrison County Courthouse building, the Governor Hendricks' Headquarters, Constitution Elm, the first state office building, the Kintner-McGrain House (Cedar Glade), and the Posey House, among others. In 1989 the historic district's boundary was increased to include The Kintner House Inn, among other commercial and residential buildings.

In 2008 Corydon celebrated its bicentennial anniversary with a year-long series of events that included the unveiling of a $200,000 bronze statue of Honorable Frank O'Bannon, the late governor of Indiana and a former citizen of Corydon.

Corydon is located near the center of Harrison County. Indiana State Road 62 passes through the town from east to west; Interstate 64 passes in the same direction less than a mile north of the town. The state capitol of Indianapolis is about 120 miles (190 km) to the north, and the city of Louisville, Kentucky is about 25 miles (40 km) to the east. Indian Creek passes through the town; the creek continues to the southwest where it empties into the Ohio River.

There were 1,341 households of which 26.2% had children under the age of 18 living with them, 35.6% were married couples living together, 11.9% had a female householder with no husband present, 5.9% had a male householder with no wife present, and 46.6% were non-families. 41.6% of all households were made up of individuals and 20.5% had someone living alone who was 65 years of age or older. The average household size was 2.14 and the average family size was 2.88.

There were 1,171 households out of which 25.1% had children under the age of 18 living with them, 40.4% were married couples living together, 13.3% had a female householder with no husband present, and 42.4% were non-families. 37.0% of all households were made up of individuals and 19.0% had someone living alone who was 65 years of age or older. The average household size was 2.17 and the average family size was 2.81. 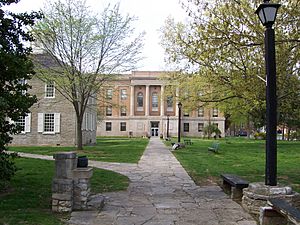 Because of its historic sites and the historic events that took place at Corydon, it has become a southern Indiana tourist destination. The town hosts weekly events from early spring until late fall, usually centered on its historic town square. Local events include an annual Halloween Parade, the Harrison County Fair, Friday night band concerts during the summer, and an annual reenactment of the Battle of Corydon, as well as country and bluegrass music performances. A weeklong county fair is held the last week of July at the Harrison County fairgrounds. It is one of Corydon's more popular events, with attendance usually exceeding 3,000 each night. The fair includes 4-H exhibits, a midway, demolition derbies, harness racing, and musical entertainment. 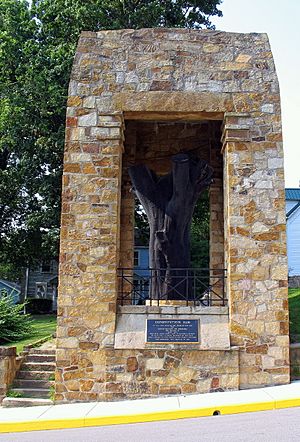 The Constitution Elm as seen in the summer of 2006

All content from Kiddle encyclopedia articles (including the article images and facts) can be freely used under Attribution-ShareAlike license, unless stated otherwise. Cite this article:
Corydon, Indiana Facts for Kids. Kiddle Encyclopedia.