Squire Boone Jr. was born in Berks County, Pennsylvania, on October 5, 1744, the son of Squire Boone Sr. and Sarah Jarman Morgan. In 1749, he along with his family moved to Rowan County, North Carolina, and lived in the Yadkin Valley. In 1759, aged 15, he was sent back to Pennsylvania to apprentice as a gunsmith under his cousin Samuel Boone. After five years of apprenticeship, he returned to North Carolina. On August 8, 1765, he married Jane Van Cleave, who was of Dutch heritage. Together, the couple had five children.

From 1767 to 1771, he went on several long hunts, with his brother, Daniel, into the Kentucky wilderness. In 1775, Richard Henderson, a prominent judge from North Carolina, hired Daniel Boone to blaze what became known as the Wilderness Road, which went through the Cumberland Gap and into central Kentucky. Squire Boone accompanied his brother and 30 others, assisting in the settlement of Boone's Station (present-day Boonesborough).

In Spring 1779, after the siege of Boonesborough, where Squire had a rifle ball cut out of his shoulder, he moved his family to the settlement at the Falls of the Ohio that would become Louisville. In 1780, he brought 13 families to "Painted Stone", a tract of land in Shelby County, and established Squire Boone's Station there, the first permanent settlement in the county. He was wounded in April 1781 when Indians attacked the fort; complications of the gunshot injury would result in his right arm being an inch and a half shorter than his left.

On September 13, 1781, the settlers abandoned the undermanned station and headed for nearby Linn's Station. Since Squire Boone was still too weak from his injury to make the trip, he stayed behind at the station with his family and one other. The fleeing settlers were attacked in what became known as the Long Run Massacre.

In 1782, he began acting as a land locator for wealthy land speculators who did not want to personally risk living on the frontier. However, due to financial losses in this line of work, he lost his own property, including the station, in 1786 and was forced to settle elsewhere in the county. He served two terms in the Virginia legislature in 1789 and 1790 and was the primary sponsor of a bill to charter the town of Louisville.

After attempting to establish a settlement near present-day Vicksburg, Mississippi, and staying with his brother Daniel in Missouri for several years, he eventually settled with his family in Harrison County, Indiana, south of Corydon c. 1804. There, he settled with his four sons and the sons of Samuel Boone. The settlement is in what is now called Boone Township, and it began to flourish early on. Squire Boone personally acquired a large tract of land on the western edge of the township near the cave he and his brother had hid in many years earlier to evade Indians. Boone considered the cave to be sacred and decided that was where he wanted to be entombed.

On his land, Boone carved stone out of a nearby hill to build his home. He carved into the quarry wall various religious and political statements that are still there today. Boone would also build Old Goshen Church, one of the first churches in the state. Boone also became a close friend of Harvey Heth and involved in the local politics of the area as one of the leading citizens. He was Harrison County's Justice of the peace in 1808.

Squire Boone died of congestive heart failure, at age 70, on August 5, 1815 and was buried in a cave on his property. His remains were left undisturbed for many years, but in the mid-20th century relic hunters began taking parts of his coffin and even some of his bones. In 1973, his remains were removed from a small pit cave on the property and placed into a new coffin built by employees of the cave and placed inside the commercial cave, where it resides today, at the end of the tour of Squire Boone Caverns. 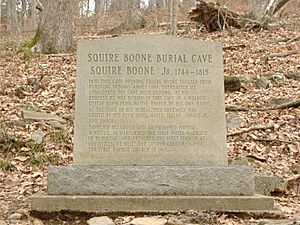 All content from Kiddle encyclopedia articles (including the article images and facts) can be freely used under Attribution-ShareAlike license, unless stated otherwise. Cite this article:
Squire Boone Facts for Kids. Kiddle Encyclopedia.