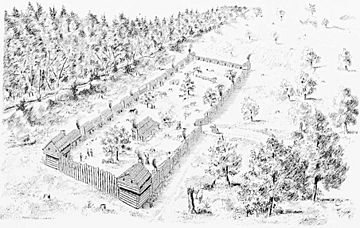 Boonesborough is part of the Richmond-Berea micropolitan area. 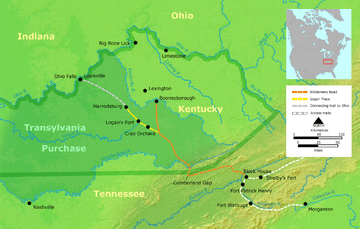 The Transylvania Purchase at Sycamore Shoals in Elizabethton, Tennessee and the Wilderness Road into Kentucky.

Boonesborough was founded as Boone's Station by the frontiersman Daniel Boone while working for Richard Henderson and Nathanial Hart of the Transylvania Company. Boone led a group of settlers through the mountains from Fort Watauga (present-day Elizabethton in Tennessee), carving the Wilderness Road through the Cumberland Gap, and established Fort Boonesborough. Boone lived there from 1775 to 1779. Boonesborough was the town in the area of present-day Kentucky formally chartered by the Commonwealth of Virginia which then claimed it. It was also one of the first English-speaking communities west of the Appalachian Mountains. Boone successfully led his fellow settlers during the Siege of Boonesborough in 1778. He then moved to his son Israel's settlement at Boone's New Station near present-day Athens, Kentucky.

By 1877, Boonesborough had "almost disappeared as a village".

All content from Kiddle encyclopedia articles (including the article images and facts) can be freely used under Attribution-ShareAlike license, unless stated otherwise. Cite this article:
Boonesborough, Kentucky Facts for Kids. Kiddle Encyclopedia.