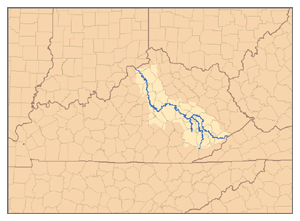 A map of the Kentucky river. 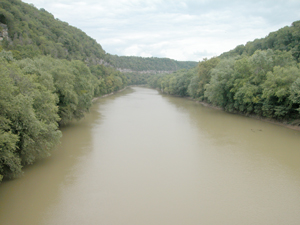 A picture of the Kentucky river.

The Kentucky River is a river in the state of Kentucky. It is a tributary of, or flows into, the Ohio River and is 259 miles long. The city of Frankfort is located on the Kentucky River. It is formed at Beattyville, Kentucky, which is in Lee County, which is where the North and South Forks come together.

Map of the watershed of the Kentucky River, showing the North Fork, Middle Fork, and South Fork tributaries.

The river is formed in eastern Kentucky at Beattyville, in Lee County, when the North, Middle and South Forks meet at about 670 feet (204 m). The river flows generally northwest, and is highly meandering in the mountains. It then flows through Daniel Boone National Forest, then past Irvine and Boonesborough, then southwest, passing south of Lexington, then north through Frankfort. It joins the Ohio at Carrollton.

Between Clays Ferry in Madison County and Frankfort, the river passes through the Kentucky River Palisades. The latter is a series of steep gorges approximately 100 mi (160 km) in length.

According to Robert F. Collins of the United States Forest Service, Dr. Thomas Walker named the river, in 1750, Louisa River, after Princess Louisa, the wife of Prince William Augustus, Duke of Cumberland. Later, the name Louisa became Levisa and shifted to the nearby stream today called Levisa Fork River.

All content from Kiddle encyclopedia articles (including the article images and facts) can be freely used under Attribution-ShareAlike license, unless stated otherwise. Cite this article:
Kentucky River Facts for Kids. Kiddle Encyclopedia.