The Kentucky River Palisades are a series of steep, scenic gorges and limestone outcroppings that stretch for approximately 100 mi (160 km), along the Kentucky River in central Kentucky in the United States. 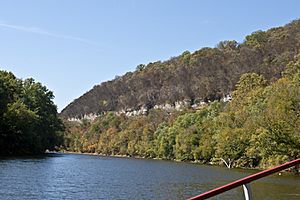 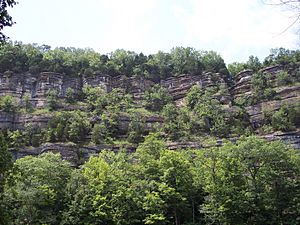 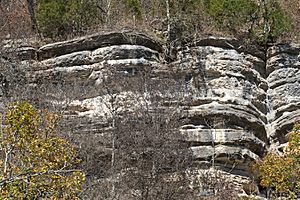 Close up of The Kentucky River Palisades

The Kentucky River Palisades is a cliff-lined entrenched meander. The meanders originally formed on the Lexington Peneplain. As sea-level lowered during the Quaternary Period, base level lowered and the meander-form river eroded downward into Ordovician-age limestones, shales, and dolomites in the Central Bluegrass Region. The Lexington Limestone, which covers most of this area, is composed of interbedded shales and thin limestones. Erosion of these lithologies usually form gentle to moderate slopes. However, the Kentucky River Fault system, part of which runs along the Palisades provided another controlling factor. Movement along the fault was largely vertical. Strata on the north side of the fault were raised several hundred feet relative to those on the south side. The thick dolomites and limestones of the High Bridge Group (Tyrone, Oregon, and Camp Nelson formations) are resistant to erosion and tend to be cliff forming. As downward erosion hit the Camp Nelson Group rocks, meander-shaped cliffs were formed. Daniel Boone's Fort Boonesborough was sited close to the fault and the eastern end of the Palisades.

The Palisades are considered by environmentalists to form a unique ecosystem in the region. Both the topography, soil, and tree composition are different from the surrounding rolling plains. The display of spring ephemeral wildflowers is especially extravagant due to the rich limestone soils. The deep cliffs provide a habitat for four species of endangered bats as well as several rare and endangered plant species. The steep cliffs surrounding the Kentucky River harbor the largest concentration of forest within the Inner Bluegrass, which is otherwise developed or cleared. Blue ash (Fraxinus quadrangulata), chinquapin oak (Quercus muehlenbergii) and sugar maple (Acer saccharum) are abundant on the steep limestone slopes, along with less common trees like rock elm (Ulmus thomasi), yellowwood (Cladrastis lutea) and yellow buckeye (Aesculus octandra). Sites on old sandy river terraces and bluff-top ridges have more acid or infertile soils and harbor beech (Fagus) and tulip poplar (Liriodendron tulipifera) trees more common in Appalachian Kentucky. Other uncommon woody species found in the Palisades include Paxistima, Chokecherry, and various types of Viburnums.

In 2007 the Kentucky State Parks announced the purchase of 90 acres (360,000 m2) adjacent to Tom Dorman State Nature Preserve for the creation of the new Palisades State Park.

All content from Kiddle encyclopedia articles (including the article images and facts) can be freely used under Attribution-ShareAlike license, unless stated otherwise. Cite this article:
Kentucky River Palisades Facts for Kids. Kiddle Encyclopedia.