Counties of the Eastern Mountain Coal Fields of Kentucky. 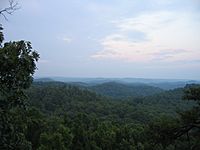 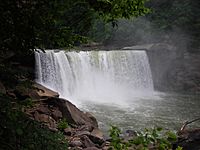 The Eastern Kentucky Coalfield is part of the Central Appalachian bituminous coalfield, including all or parts of 30 Kentucky counties and adjoining areas in Ohio, West Virginia, Virginia and Tennessee. It covers an area from the Allegheny Mountains in the east across the Cumberland Plateau to the Pottsville Escarpment in the west. The region is known for its coal mining; most family farms in the region have disappeared since the introduction of surface mining in the 1940s and 1950s.

The Daniel Boone National Forest is located on rough but beautiful terrain along and east of the Pottsville Escarpment. There are many natural arches and sandstone cliffs that are excellent for rock climbing and rappeling. The Red River Gorge, part of the National Forest, is known worldwide in rock climbing circles.

The Sheltowee Trace Trail runs 420–430 km north and south through the region.

During the American Civil War most of this region leaned toward the Union due to its makeup at the time of mostly small farmers, but more than 2,000 men from this area formed the 5th. Kentucky Vol. Inf., known as the Army of Eastern Kentucky, under Gen. Humphrey Marshall, C.S.A. During the Great Depression, New Deal programs and the organizing of the United Mine Workers of America made many of the eastern counties Democratic.

As of the 1980s, the only counties in the United States where over half of the population cited "English" as their only ancestry group were in the hills of eastern Kentucky (and made up virtually every county in this region). In the 1980 census, 1,267,079 Kentuckians out of a total population of 2,554,359 cited that they were of English ancestry,making them 49 percent of the state at that time.

The Eastern Kentucky Coalfield covers 31 counties with a combined land area of 13,370 sq mi (34,628 km²), or about 33.1 percent of the state's land area. Its 2000 census population was 734,194 inhabitants, or about 18.2 percent of the state's population. The largest city, Ashland, has a population of 21,981. Other cities of significance in the region include Pikeville, Corbin, and Middlesboro. The state's highest point, Black Mountain, is located in the southeastern part of the region in Harlan County.

The following list consists of Eastern Kentucky cities with populations over 4,000 according to the U.S. Census estimates released in 2014: 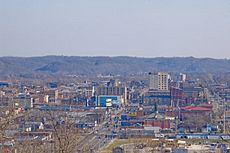 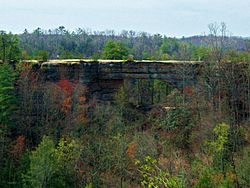 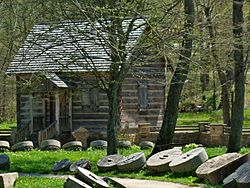 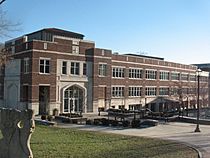 All content from Kiddle encyclopedia articles (including the article images and facts) can be freely used under Attribution-ShareAlike license, unless stated otherwise. Cite this article:
Eastern Kentucky Coalfield Facts for Kids. Kiddle Encyclopedia.