Cumberland Falls, sometimes called the Little Niagara, the Niagara of the South, or the Great Falls, is a large waterfall on the Cumberland River in southeastern Kentucky. Spanning the river at the border of McCreary and Whitley counties, the waterfall is the central feature of Cumberland Falls State Resort Park.

Under a full moon on clear nights, an elusive lunar rainbow or moonbow is sometimes formed by the mist emanating from the falls.

The Moonbow that appears here may be observed under a full moon and a clear sky. An arch of white light is usually produced at base of Falls and continues downstream. Generations of people have visited here to see this natural phenomenon. The last hotel on this site, Moonbow Inn, was named for the moonbow. 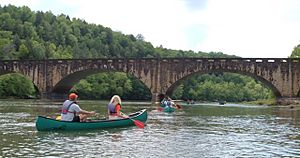 All content from Kiddle encyclopedia articles (including the article images and facts) can be freely used under Attribution-ShareAlike license, unless stated otherwise. Cite this article:
Cumberland Falls Facts for Kids. Kiddle Encyclopedia.