McCreary County is a county located in the U.S. state of Kentucky. As of the 2010 census, the population was 18,306. Its county seat is Whitley City. The county is named for James B. McCreary, a Confederate war soldier and two-time Governor of Kentucky (1875–1879, 1911–1915). During his second term as Governor, McCreary County was created by the Legislature and was named in his honor.

The majority of the county is controlled by the federal government. 43% is managed by the Daniel Boone National Forest, and 18% managed by the National Park Service as the Big South Fork National River and Recreation Area.

McCreary County was formed on March 12, 1912, the 120th and final county in order of formation. The present county boundaries contain 427.7 square miles (1,107.7 km2) of land area. The majority of the county was carved out of Wayne and Whitley Counties, with a large center strip following the rail line and roadway from Pulaski County, and a northeastern portion taken from Laurel County. The early history of the area is that of those counties, and is related in the historic perspectives for them. The map to the left shows the network of roadways that had been established by the 1860s. A dotted blue line and settlement names have been added for reference. 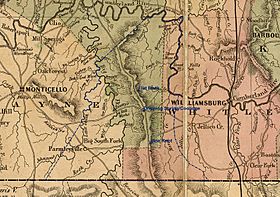 The most significant early feature of the future county was the Jacksboro Road. Running from Jacksboro, Tennessee, to Point Isabel and Somerset, this pioneer road was simply an enlargement of the Tellico Trail, an Indian route that had been used for thousands of years. Several other trails intersected this road, and led to the growth settlement villages such as Pine Knot, Dripping Springs/Coolidge, and Flat Rock. Other settlement occurred in far flung, sequestered hollows. The economy of the times was based upon small-scale subsistence agriculture, timber products such as railroad ties and barrel staves, and small coal mines.

Beginning in the early 19th century, Cumberland Falls gained attention as an early tourism destination. Later development increased visitation, and the Brunsen Inn was a popular destination for seasonal visitors. Until a road was built from Whitley County in 1931, the primary access to the Falls was through McCreary. With a generous contribution from one of the DuPont family heirs, the Falls joined the state park system in 1930.

The completion of the Cincinnati Southern Railway line through the county in 1880 changed its economic characteristics forever. Access to distant markets for timber and coal caused the emergence of many small mining and logging companies. Nothing however, was to have the impact of the Justus S. Stearns enterprises. From 1903 throughout most of the 20th century, the territory of McCreary County was dominated and controlled by Stearns company interests.

Attempting to avoid financial losses during the Great Depression of the 1930s, the Stearns cluster of companies sold vast quantities of land to the U.S. Government, becoming part of what was to become the Cumberland National Forest in 1937. This forest reserve was subsequently renamed Daniel Boone National Forest. In the 1970s, legislative action acquired additional lands in southern McCreary and Tennessee, creating the Big South Fork National River and Recreation Area in the mid-1970s. 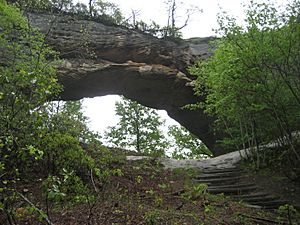 The western boundary of McCreary County represents the division between two geological plateau systems, the Pennyroyal and the Cumberland, which are located in the Mississippian Plateau and the Eastern Coal Field respectively. Running diagonally along the Wayne-McCreary County line and through southern Pulaski County is the Pottsville Escarpment. This rugged strip of land is the dividing feature separating the geologically younger Eastern Kentucky Coal Field region from the older, western geology of the state. It is a sandstone belt of cliffs and steep sided, narrow crested valleys. It is located in the Daniel Boone National Forest.

Among the more spectacular features are the sheer cliffs themselves, and numerous gorges, waterfalls, rock shelters, and natural stone arches. Two of the best known sections of the escarpment in Kentucky are the Red River Gorge Geological Area and the Natural Bridge State Park in the north-central portion of the Daniel Boone National Forest.

McCreary and the southern reaches of Pulaski County represent the beginnings of the Cumberland Plateau and the Eastern Kentucky Coal Field region. Most of the geological underpinning of this region is capped with thick sandstone, and formidable coal seams are common in this formation. The terrain is sharply dissected by valleys and stream systems, and limited lands suitable for large-scale conventional agriculture exist. Because of this, the economies of the area have historically been centered upon extractive industries such as timber and mining.

The median income for a household in the county was $19,348, and the median income for a family was $22,261. Males had a median income of $20,823 versus $15,575 for females. The per capita income for the county was $9,896. About 26.10% of families and 32.20% of the population were below the poverty line, including 40.50% of those under age 18 and 27.30% of those age 65 or over. The county's per-capita income makes it one of the poorest counties in the United States, and second in poverty only to another county in the same Kentucky region, Clay County, among counties with a majority non-Hispanic white population.

McCreary is the last remaining county in the Commonwealth of Kentucky that does not have any incorporated city or township. The following McCreary County communities are census-designated places:

The economic history of McCreary County has been one of boom and bust, based upon the extractive resources of coal mining and timber. The Stearns interests sold the last of their mining operations to Blue Diamond Coal in the 1980s, and the county's last operating mine closed in 1994. A resurgence of the coal industry does not seem possible, as the local coal is high in sulfur, and drainage from coal mining would adversely affect a number of outstanding and special waters in the county.

Industrial development began in the 1970s, with new manufacturing concerns in the sewing industry. Changes in the global economy have shifted a substantial percentage of the consumer garment market to production facilities outside the United States. Those that remain in the county draw their work from military contracts, and the production of high-end consumer goods. Timber remains a factor in the economy, with logging and cut hardwood production. Since the 1970s, the county has attempted to develop three industrial parks with little success. The latest venture, on Kentucky Route 92 in Pine Knot, is building a "spec" building as a means of attracting new industry to the county.

Agriculture has never played a significant role in the county's economy. In 2002, 5% of the county was in farmland. Top products were livestock, hay and forage. Together this represented a total market value of $566,000, down 1% from 1997. These low numbers indicate that the county has never had a substantial agricultural industry, and that over 80% of the county lands are held by the federal government. McCreary County is ranked number 112 out of 120 counties in overall agricultural production.

The tourism industry in the county may trace its beginnings to the restoration of Historic Stearns, the development of the scenic railway, the interpretive work at Blue Heron, and the reconstruction of Barthell, the site of Stearns Company's first coal mine and town in 1903. Those resources may represent the largest interpretive collection of historic coal mining in America. The Big South Fork Scenic Railway is presently in a major development project to add a steam locomotive and to extend the line.

The Big South Fork NRRA represents 196 square miles (508 km2) of land, of which approximately one-third is located in McCreary County. The largest section of the park and its main Bandy Creek visitor center are located in Tennessee. In 2004, the park received 901,425 visitors, down 23% from 2002. Due to a lack of organized activities, events, and recreational tourism opportunities, visitation on the Kentucky side does not fare well. Similar issues exist for visitation in the Stearns district of the Daniel Boone National Forest.

US 27 splits the county north and south, and KY 92 runs east and west. US 27 and KY 92 run concurrent from Pine Knot to the traffic light at Stearns, where KY 92 splits off and heads west towards Wayne County. McCreary is also served by Norfolk Southern Railway, which has several industrial sidings in the area. NS also interchanges traffic with the Kentucky and Tennessee Railway in Stearns.

All content from Kiddle encyclopedia articles (including the article images and facts) can be freely used under Attribution-ShareAlike license, unless stated otherwise. Cite this article:
McCreary County, Kentucky Facts for Kids. Kiddle Encyclopedia.