Wayne County is a county located in the U.S. state of Kentucky. As of the 2010 census, the population was 20,813. Its county seat is Monticello. The county was named for Gen. Anthony Wayne. It is a prohibition or dry county.

Wayne County was formed December 13, 1800 from Pulaski and Cumberland Counties. It was the 43rd county and is named for General "Mad Anthony" Wayne, a hero of the American Revolution and the Northwest Indian War. Wayne's victory at the Battle of Fallen Timbers virtually ended the Indian threat against Kentucky settlers.

During the winter of 1861, an act was passed by the Confederate government of Kentucky to rename Wayne County to Zollicoffer County in honor of Felix Zollicoffer, who died at the Battle of Mill Springs.

The county's elevation ranges from 723 feet (220 m) to 1,788 feet (545 m), at the Monticello/Wayne County Airport the elevation is 963 feet (294 m). Wayne County is located in the Pennyrile Plateau (image) and Eastern Coal Field (image) regions of Kentucky. 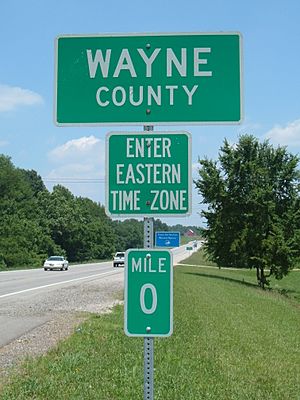 Wayne County is on Eastern Time; however, its western border, shared with Clinton and Russell Counties, is part of the Eastern/Central time zone boundary, as is its southern border with Pickett County, TN. Wayne County was on Central time until October 2000; an account of this change is documented in an article by Dr. Stanley Brunn of the University of Kentucky.

It has the tz database zone identifier America/Kentucky/Monticello.

All content from Kiddle encyclopedia articles (including the article images and facts) can be freely used under Attribution-ShareAlike license, unless stated otherwise. Cite this article:
Wayne County, Kentucky Facts for Kids. Kiddle Encyclopedia.