Pickett County is a county located in the U.S. state of Tennessee. As of the 2010 census, the population was 5,077, making it the least populous county in Tennessee. Its county seat is Byrdstown.

The city of Byrdstown and the Kentucky town of Albany, 11 miles (18 km) to the northeast, are positioned between two Army Corps of Engineers lakes: Dale Hollow Lake, mainly in Tennessee, and Lake Cumberland, in Kentucky. The area is known as "Twin Lakes" and Byrdstown is noted as "The Gateway To Dale Hollow Lake". Every year thousands of people vacation at the many resorts situated along the lakes.

Pickett County was created in 1879 from sections of Overton and Fentress counties. It was named for Howard L. Pickett, a member of the state legislature who had been instrumental in the county's formation. Nobel Peace Prize winner Cordell Hull was born in the county. He won the prize for his role in establishing the United Nations.

According to the U.S. Census Bureau, the county has a total area of 174 square miles (450 km2), of which 163 square miles (420 km2) is land and 12 square miles (31 km2) (6.6%) is water. It is the fourth-smallest county in Tennessee by land area and third-smallest by total area. The eastern part of the county, much of which is part of Pickett State Forest, lies atop the Cumberland Plateau, while the western, more populated half is located on the Highland Rim. The Wolf River and the Obey River, the lower parts of which are part of Dale Hollow Lake, pass through the county. The rivers converge just west of the county's border with Clay County. 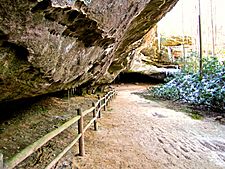 Streams in the far eastern section of the county are part of the watershed of the Big South Fork of the Cumberland River. 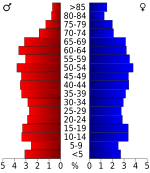 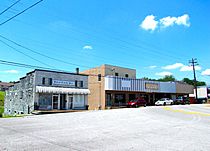 Static, at the Tennessee-Kentucky state line

All content from Kiddle encyclopedia articles (including the article images and facts) can be freely used under Attribution-ShareAlike license, unless stated otherwise. Cite this article:
Pickett County, Tennessee Facts for Kids. Kiddle Encyclopedia.