Fentress County is a county located in the U.S. state of Tennessee. As of the 2010 census, the population was 17,959. Its county seat is Jamestown.

"Pumping water by hand in 1942 from the sole water supply in this section of Wilder, Tennessee in Fentress County."

Fentress County was formed in 1823 from portions of Morgan, Overton and White counties. The county was named in honor of James Fentress (1763–1843), who served as speaker of the state house, chairman of Montgomery County Court, and commissioner to select seats for Haywood, Carroll, Gibson and Weakley counties in West Tennessee.

Fentress County was the site of several saltpeter mines. Saltpeter is the main ingredient of gunpowder and was obtained by leaching the earth from several local caves. The largest mine was in York Cave, which is located near the Wolf River Post Office. At one time, twenty-five large leaching vats were in operation in this cave. According to Barr (1961) this cave was mined during the Civil War. Buffalo Cave near Jamestown was also a major mine with twelve leaching vats. Manson Saltpeter Cave in Big Indian Creek Valley was a smaller operation with four leaching vats. It is possible that any or all of these caves were mined during the War of 1812, when saltpeter mining was widespread in both Kentucky and Tennessee.

In response to Governor Harris' asking the state government of secession, the two representatives for Fentress County in 1860; Reese T. Hildreth, and R. H. Bledsoe (of the State Senate and House respectively) voted both in favor of secession in 1861.

Alvin York (1887–1964), a hero at the Meuse-Argonne Offensive during World War I, was born and lived in Fentress County. He also established the Alvin C. York Agricultural Institute in Jamestown in 1924. York's house and farm are now part of Sgt. Alvin C. York State Historic Park in Pall Mall.

Fentress County includes part of Dale Hollow Reservoir and is drained by forks of the Obey and Cumberland Rivers.

Valley of the Three Forks near Pall Mall, with the Cumberland Plateau dominating the horizon 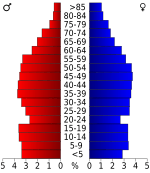 All content from Kiddle encyclopedia articles (including the article images and facts) can be freely used under Attribution-ShareAlike license, unless stated otherwise. Cite this article:
Fentress County, Tennessee Facts for Kids. Kiddle Encyclopedia.