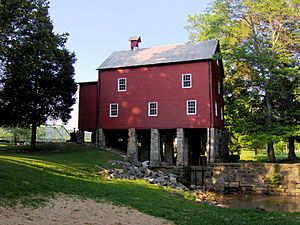 Pall Mall ( pal-_-mal) is a small unincorporated community in the Wolf River valley of Fentress County, Tennessee, United States. It is named after Pall Mall, London. Pall Mall is located near the Kentucky-Tennessee state-line in northeastern-central Tennessee. The population was at 1,398 people according to the 2000 census.

The World War I hero Alvin York was raised in Pall Mall. His son Andrew Jackson York lives in the town (as of 2013). York is commemorated at the Sgt. Alvin C. York State Historic Park in Pall Mall, which includes the family farmhouse and grist mill. York is buried at Wolf River Cemetery in Pall Mall.

All content from Kiddle encyclopedia articles (including the article images and facts) can be freely used under Attribution-ShareAlike license, unless stated otherwise. Cite this article:
Pall Mall, Tennessee Facts for Kids. Kiddle Encyclopedia.