Sgt. Alvin C. York State Historic Park is a state park in Pall Mall, in the U.S. state of Tennessee. Situated along the Wolf River, the park contains the farm and gristmill once owned by decorated World War I soldier Alvin C. York (1887–1964), who lived in the Pall Mall area for his entire life. Along with the millhouse and milldam, the park includes York's two-story house, York's general store and post office, the Wolf River Cemetery (where York and his family are buried), the Wolf River Methodist Church, the York Bible Institute, and various picnic facilities.

Alvin York is one of the most celebrated soldiers in American history. He joined the pacifist Church of Christ in Christian Union in 1915, and when drafted for service in World War I in 1917, he applied for conscientious objector status, but was denied. On October 8, 1918, while on patrol along the Meuse-Argonne Front in France, York and his platoon wandered behind enemy lines and were caught in an ambush that left over half the platoon dead. York then led the handful of survivors in a counterattack that resulted in the capture of 132 German soldiers.

York was awarded the Medal of Honor and became an instant celebrity, and upon his return to the United States he was barraged with offers for endorsements (both commercial and political), movies, and books, most of which he initially rejected, believing it was wrong to profit from an act of war. The Nashville Rotary Club raised the funds to buy York his Pall Mall farm, which it presented to York in 1922. After York's death in 1964, his widow donated the farm to the state of Tennessee. 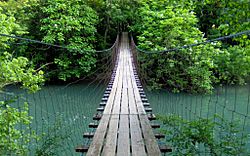 Swing bridge over the Wolf River, part of the park's walking trail.

The community of Pall Mall is situated in a rugged valley carved by the Wolf River, which rises at the base of the Cumberland Plateau a few miles to the east and flows westward through the community. The York farm is located in a relatively broad stretch of the valley along a bend in the river just downstream from the river's confluence with Rotten Fork. U.S. Route 127 (York Highway) is the only major road in the area, connecting Pall Mall to Jamestown, about 10 miles (16 km) to the south, and Byrdstown, about 15 miles (24 km) to the northwest.

Historical structures and other attractions 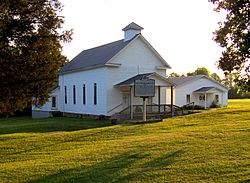 An M247 "Sergeant York," a type of self-propelled anti-aircraft tank developed for the U.S. Army in the 1970s, used to be on display near the York house. A swing bridge built by AmeriCorps*NCCC in 2000 crosses the Wolf River along the park's walking trail, connecting the US-127 and Wolf River Loop sections of the park. The park has set up a small "moonshine still" (currently consisting of two copper barrels) near the York Mill.