Byrdstown is a town in Pickett County, Tennessee, United States. The population was 803 at the 2010 census. It is the county seat of Pickett County.

Byrdstown was established in 1879 as a county seat for the newly formed Pickett County. The town, where several families already lived, was named for Colonel Robert K. Byrd, a state senator whose district included the new county. Byrdstown was officially incorporated in 1917.

Former Secretary of State Cordell Hull (1871–1955)— who played a pivotal role in the creation of the United Nations— was born just west of Byrdstown. The Pickett County Courthouse, built in 1935, and the Cordell Hull Birthplace are both listed on the National Register of Historic Places. Other historical sites include the Amonett House at the junction of TN-325 and TN-111.

Tennessee State Route 325 traverses Byrdstown from west to east, mostly following West Main Street and East Main Street. This highway connects Byrdstown with the Dale Hollow Lake and Cordell Hull Birthplace State Park areas to the west, and the rural parts of central Pickett County to the east. Tennessee State Route 111, which intersects SR 325 in western Byrdstown, connects the town with Livingston to the southwest, and Static at the state line to the north. At Static, the highway terminates at an intersection with U.S. Route 127, with the latter continuing northward to Albany, Kentucky.

According to the United States Census Bureau, the town has a total area of 1.5 square miles (3.9 km2), all of it land. 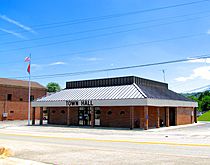 There were 395 households, out of which 24.1% had children under the age of 18 living with them, 39.7% were married couples living together, 14.9% had a female householder with no husband present, and 41.0% were non-families. 37.7% of all households were made up of individuals, and 18.7% had someone living alone who was 65 years of age or older. The average household size was 2.11 and the average family size was 2.80.

All content from Kiddle encyclopedia articles (including the article images and facts) can be freely used under Attribution-ShareAlike license, unless stated otherwise. Cite this article:
Byrdstown, Tennessee Facts for Kids. Kiddle Encyclopedia.