Cordell Hull (October 2, 1871 – July 23, 1955) was an American politician from the U.S. state of Tennessee. He is known as the longest-serving Secretary of State, holding the position for 11 years (1933–1944) in the administration of President Franklin Delano Roosevelt during most of World War II. Hull received the Nobel Peace Prize in 1945 for his role in establishing the United Nations, and was referred to by President Roosevelt as the "Father of the United Nations".

He served in the Tennessee House of Representatives from 1893 to 1897. During the Spanish–American War, he served in Cuba as a captain in the Fourth Regiment of the Tennessee Volunteer Infantry.

In 1945, Cordell Hull was awarded the Nobel Peace Prize for "co-initiating the United Nations".

Hull resigned in November 1944 because of failing health as the longest-serving Secretary of State, having served 11 years, nine months in that post. Roosevelt described Hull upon his departure as "the one person in all the world who has done his most to make this great plan for peace (the United Nations) an effective fact". The Norwegian Nobel Committee honored Hull with the Nobel Peace Prize in 1945 in recognition of his efforts for peace and understanding in the Western Hemisphere, his trade agreements, and his work to establish the United Nations. 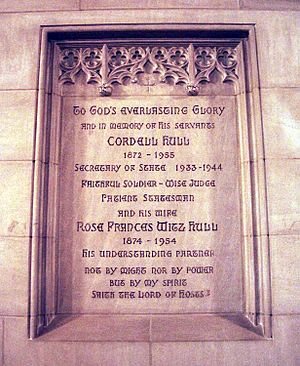 Gravesite of Cordell Hull at the St. Joseph of Arimathea Chapel, in Washington National Cathedral Church

He died on July 23, 1955, at age 83, at his home in Washington, D.C., after a lifelong struggle with familial remitting-relapsing sarcoidosis (often confused with tuberculosis). He is buried in the vault of the Chapel of St. Joseph of Arimathea in the Washington National Cathedral.

There is now a Cordell Hull Museum located near his birthplace in Byrdstown, Tennessee, which houses his papers and other memorabilia. 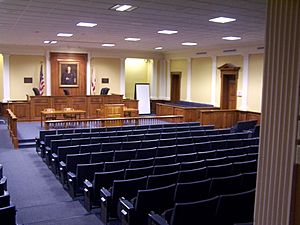 His law school, Cumberland School of Law, continues to honor him with a Cordell Hull Speaker's Forum and the pictured Moot Court Room. 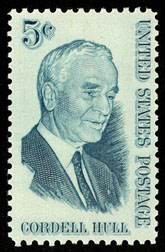 Cordell Hull Birthplace State Park, near Byrdstown, Tennessee, was established in 1997 to preserve Hull's birthplace and various personal effects Hull had donated to the citizens of Pickett County, including his Nobel Peace Prize.

A segment of Kentucky highway routes 90, 63, and 163, from Interstate 65 at Mammoth Cave National Park south to the Tennessee State Line, is named "Cordell Hull Highway".

The Shoreline School District in Shoreline, Washington, formerly had a Cordell Hull Middle School; it was renamed in the mid-1990s to Meridian Park Elementary, after a renovation.

The Cordell Hull State Office Building. Located at the base of Capital Hill, Nashville, Tennessee, is a secure 10 story building that contains the offices of Attorney General, Health and Child Services.

All content from Kiddle encyclopedia articles (including the article images and facts) can be freely used under Attribution-ShareAlike license, unless stated otherwise. Cite this article:
Cordell Hull Facts for Kids. Kiddle Encyclopedia.